Chronicles of Twatrick: The inheritance shenanigans.

Since there's been some animated discussion related to my recent suspicion regarding Lloydminster's Patrick Ross and the potentially underhanded disposition of his inheritance related to some farm property outside of Marshall, Saskatchewan, permit me to wax academic to clarify a few things.

The suspicion is that, in some way, while Patrick (as well as his siblings) might have inherited some quite valuable farmland from his grandfather, Patrick might have (quietly) signed away his portion to conceal it from both me and the process of bankruptcy. Or perhaps he officially somehow refused to accept that inheritance until such time as he is out of bankruptcy and is safe to claim it. Neither of these scenarios stands up to scrutiny, and here's why.

First, the idea of acquiring any sort of windfall while still bankrupt (inheritance, lottery winnings, what have you) and being able to keep it does not fly, as the rules of bankruptcy make it absolutely clear that the instant you acquire assets of any kind while bankrupt, those assets devolve to your trustee, for the purpose of being distributed to the creditors. The rationale here is obvious -- if you've declared bankruptcy such that your creditors are stiffed in the sense of getting only a fraction of what you owe them, and you suddenly come into cash, your creditors are not left out in the cold, and they will share in those spoils. That's only fair.

More specifically, in the case of an inheritance, there is no mechanism by which you can "refuse" or "defer" the inheritance; I remember quite clearly way back when looking into this, and was assured by what I read that the inheritance transfers on the instant of the passing away, so no bankrupt has the right to state that they're not willing to accept the inheritance; someone dies, you're in the will, you inherit, it devolves to the trustee, and that's all there is to it. (I cannot recall where I read this, but I distinctly remember the assurance that that is how it works.)

Another suspicion was that, if one suspects they will be declaring bankruptcy, they might ahead of time ask for the will to be changed to have someone else receive the assets.  Well, possibly, but the bankruptcy regime has also considered that possibility, in that creditors are allowed to examine the financial history of the bankrupt for up to a year or more before the filing, so one can see if there was a flurry of weird transfers in order to divest oneself of assets before filing in order to hide assets and screw the creditors. So that would also typically end in failure. But here's the capper in all of this.

The only incentive for somehow deferring an inheritance (or any other kind of financial windfall) is that one owed a lot of money (say, $100,000), and one received a really favourable conditional discharge order (CDO), say, $25,000 total to be paid over a few years, and one wants to pay off that $25,000 and get out of bankruptcy before suddenly collecting whatever massive windfall awaits. Sure, that makes sense, but it won't work here for a rather obvious reason, that reason being that Patrick Ross is no longer on the hook for just his 2014 CDO of $200/month for 14 years.

Rather, because of Patrick's relentless non-compliance with his obligations under the bankruptcy regime, I filed a motion and had him removed from the protection of bankruptcy's stay of proceedings so that, even though he is still technically bankrupt, he now owes me the full amount of my 2010 judgment against him, along with all of the accruing interest and collection-related costs. In short, even if he could somehow defer/conceal any assets he's collected since his filing for bankruptcy in December of 2012, there is no point since the only way to collect those assets is to first get out of bankruptcy, and the only way to do that at this point is to pay me in full what he owes me, so there's really no value in deferring or concealing anything.

Patrick is staying in bankruptcy until I collect what he owes me in its entirety while, at the same time, if it turns out that he did conspire with his farm co-owners to conceal or transfer his ownership for the purpose of being able to sell the farm, that opens up a whole world of possible fraud and misconduct charges for the lot of them.

I just thought it was worth clarifying all of that.

P.S. It's worth repeating that if Patrick played these sorts of games to conceal his assets and, worse, to legalize the sale of property that was not his to sell, he is so totally on the hook for possible bankruptcy misconduct charges, as you can read here, a possible outcome being that he will be fined substantially, with that fine going to me as the sole creditor. Yes, it is entirely possible that Patrick will end up owing me way more than the current $106,000, and that does not even take into account potential fraud charges against his family members if they conspired to help him with this.

P.P.S. I almost forgot ... Happy interestversary, in that it has now been exactly eight months since a Saskatchewan judge slapped a 5 per cent annual interest rate on what Patrick owes me, meaning that Patrick's debt to me is increasing about $500 per month (plus related Sheriff's charges).

BONUS TRACK: Here's one take on inheriting while bankrupt -- I think you can appreciate the danger of the games Patrick might be playing: 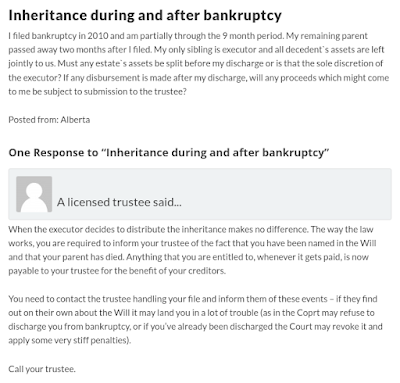 I've been told by a lawyer that while you can receive a cheque from a lawyer's office, the monies are technically not "recieved" until you deposit it in a bank account, yours or not.

So, maybe Patrick has a very valuable piece of paper hidden in his room that you'd want to see.

Anon @ 6:17 AM: The above may or may not be accurate, but it's not relevant to the topic at hand. The issue here is whether or not Patrick can conceal/defer/sell any after-acquired assets while he is still an undischarged bankrupt, and the rule is that he can't, whether he voluntarily accepts that asset or not.

I the will put the farm into a trust, maybe it was protected.

Anonymous @ 3:02PM: If the proceeds (or property) were placed in a trust with Patrick and his siblings as the designated beneficiaries, then Patrick’s portion of that trust is still owned by Patrick.

What MgS said: Putting something in a trust still requires you to identify who it's being put in a trust *for*. That would not solve Patrick's problem here.

Did Twatsy fill out that voluntary form prior to the deadline?

He says "toxic douchebags are trying to hold him down" lmao.

No, Patrick. Nobody is trying to hold you down. People are merely trying to get you to do what you are legally required to do and nothing more.

Patrick's pedophile comment was toxic, now he's paying dearly for it. (How much has Twatsy paid towards his debt, versus monies spent on payments/collection fees/fines?? lol )