Sure, there's nothing grifty about crypto, right?

It's so utterly predictable that the grift factory that is Rebel News would not only latch onto the current crypto craze:

but it appears that Der Rebel is getting a cut from any registrations they push in that direction given the "Promo Code: REBELNEWS". But here's the best part.

Given Rebel News' relentless shrieking about times being tough, and people struggling to pay their bills, and how it's all Justin's fault, well, what is Ezra asking his regular yokels to hork up to attend? Whoa ... 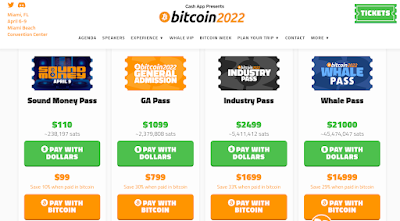 So the next time you read one of Rebel's devoted followers bitching and whining about how he's going to pay next month's mortgage, maybe remind him about how Ezra was touting the marvels of a 4-day, $21,000 bitcoin conference (off of which he was raking in a percentage for promoting it).

But, sure, feel free to complain about a carbon tax.

P.S. Dear Freedom Convoy truckers: How's that Ezra-supplied "free" legal representation working out for you? Get your truck back yet?