Chronicles of Twatrick: You have the right to remain stupid.

In an earlier episode of "Law & Order: Cripplingly Stupid Defendants," I pointed out how Lloydminster's Patrick "Kid Cash Assholery Nexus Bad Company High Noon Quintuple Threat Dragonfire Bikini Designer Creepy Stalker Sequined MMA Cosplay Tights" Ross, ever since I had him tossed bodily from the protection of bankruptcy's stay of proceedings, was now subject to the loving ministrations of Saskatchewan's Enforcement of Money Judgments Act (EMJA), and how that legislation allows me to begin digging into Patrick's finances with an opening salvo of serving him with a voluntary Sheriff's Questionnaire.
That has been done.
I was informed yesterday that Patrick was served thusly last Friday (Aprll 8), and has 10 days from date of service to fill out and return said questionnaire, meaning his deadline for doing so is next Monday. If he chooses to behave just as he has for the last 12 years, we can all expect that he will do nothing, whereupon things (as you can read) get ratcheted up to the next level of a mandatory questionnaire, but let us not get ahead of ourselves just yet, as Patrick might -- against all odds -- have an attack of common sense and realize he's pretty well fucked and should do as he's told by the Sheriffs of Saskatchewan. But a couple more related developments.
The EMJA normally requires proper service just like any other legal document, so one would assume I need to chase Patrick around Western Canada to effect service.
Not so.
A while back, I had the foresight to insist that the Court allow me (based on Patrick's established history of dodging, weaving and -- literally -- peering out from behind living room curtains until a process server left the area) to serve Patrick substitutionally, whereupon in order to serve Patrick these days, my lawyer need only e-mail Patrick, and send registered mail to his Lloyd address, cutting down on a lot of chasing. But there's more.
If, as we all expect, Patrick hands over nothing by the deadline, you would assume I would immediately leap to the batpole and insist on the next step of mandatory questionnaire. Actually, possibly not, since once I have the right to serve that questionnaire, nothing says I need to do it right away, and there are apparently some benefits to taking my time about it.
First, it gives me more time to have certain people continue digging into Patrick's finances so that I can cross-check what I learn against whatever Patrick is eventually required to tell me. And, more obviously, it allows Patrick to continue getting deeper and deeper into debt based on the accruing interest on what he owes me -- 5 per cent per year on over $105,000. Oh, and a minor point, but the cost of serving these questionnaires is, as with everything else, being added to Patrick's bill, since Patrick is required to cover the entire cost of this collection process and everything associated with it.
Is there anything else? Well, yes, but that will have to wait a few days for the big reveal, so for now, you can just mark Monday, April 18 on your calendar and check back to see if Patrick thinks it's still a really cool idea to ignore legal service. After all, that's worked out so well for him until now, right?
P.S. One of the other benefits of taking my time in serving the mandatory questionnaire is that, as you can read below, it allows me to drag in others (like Patrick's immediate family members) for related questioning:

And, trust me, I'm going to want to do some investigation beforehand to have all my ducks in a row before that happens. And when that happens, we'll see who's willing to commit perjury on Patrick's behalf, and who isn't.
I'm guessing Easter dinner might be a bit awkward at the Ross household this year.
BONUS TRACK: I will once again point out that one of the non-negotiable and fundamental obligations of a bankrupt in Canada is: 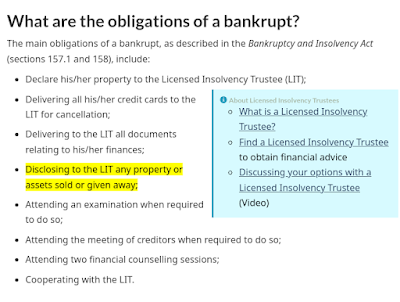 So if it turns out that Patrick and any family members have been moving assets around to hide them from me, not only will I seize them when all that comes to light, but Patrick will then be guilty of bankruptcy misconduct, whereupon I can file to have him charged thusly and fined heavily for that, the fine being added to whatever he already owes me. So, once again, we might find out which of Patrick's family members are willing to risk being charged with perjury if they continue to help Patrick conceal assets from me.
Happy Easter.
Posted by CC at 4:59 AM

The "Happy Easter" line reminds us of the time when Twatrick complained to the court because you served him documents on Good Friday. Apparently Twatsy really enjoys Good Friday for some reason???

A bit ironic about this year's Good friday, is it falls on Tyler Kryg's birthday and I know it's certainly something of a gift.