Ben Shapiro is 38 years old. You knew that, right?

Currently on Twitter, right-wing herpes infection Ben Shapiro is trending, allegedly because someone mopped the floor with him intellectually, but that's not why we're here. No, why we're here is to point out the sheer creepiness of a conservative "pundit" whose entire shtick is to frequent college campuses and subsequently brag about how he utterly destroyed some 18- or 19-year old first year sociology student, which I'm sure would be intellectually impressive, except for one thing.

Ben Shapiro is fast approaching 40, and his career consists of nothing but bouncing from one college to the next, demonstrating how he is sooooo much smarter than those teenaged college freshmen today.

That someone Shapiro's age is obsessed with showing off to college kids half his age how clever he is is, quite simply, creepy beyond description, and reminds one of Brian Griffin hanging around the bowling alley, hitting on the local high school girls: 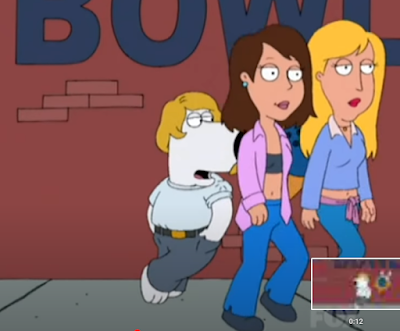 Someone should tell Shapiro that, when it comes to middle-aged creeps trying to pick up kids, Matt Gaetz already has that market cornered, and he (Shapiro) should seriously consider trying to, you know, grow up.

P.S. Hilariously, I am not the only one picking up on this: 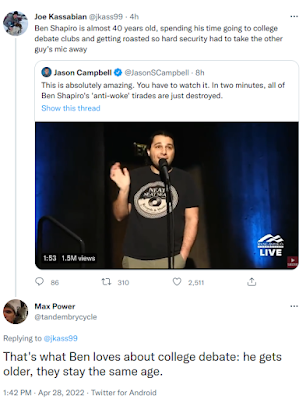 "...Ben Shapiro is trending, allegedly because someone mopped the floor with him intellectually..."

I didn't realise he was as old as he is, probably because of how intellectually stunted he comes off as (or actually is). At the same time, I guess I should have figured he's that old, given he's been around the scene since 2001, when he was 17. It's amazing how many conservative critics/pundits/etc. start out at such a young age. Not surprising though...they have to get to them before they start thinking for themselves.

There's so many examples of his ineptness and ability to get owned to his face by anyone over the age of 25 (and sometimes even younger), but if you want to see (or more accurately, hear) an example of how horrible a writer/editor/researcher he is, the podcast "Behind The Bastards" did an eight-episode deep dive into his novel "True Allegiance", published in 2017. It takes a bit to search out the episodes (I think they were all done in 2018), as they weren't done one after another (i.e. they were stretched out over several months and done whenever they needed to 'lighten the mood' from their usual fair), but I think it's worth the nine-plus hours to listen to them. Sooooo many laughs to be had.