This HAS to be a parody. 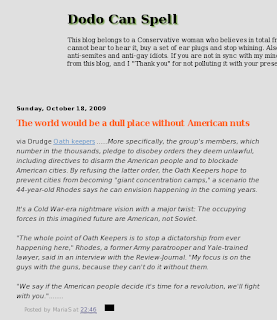 Seriously, how do you respond to Blogging Tory Maria "Dodo" Nunes, openly mocking her own ideological fellow travellers? What possible snarky response is there?

Corroding Corpse... Why do you generalize so much? Something has really gone all haywire with the wiring inside your head. Did the doctor drop you on a tiled floor at birth (can't say I blame her/him) and then did the horrid nurses use you as a football before your mom picked you up, a little too late to prevent the damage done to the already too little you were allocated in the first place?
Anyone who believes that American cities will turn into "giant concentration camps" need to be laughed at whether they are my "fellow travellers" or idiots from your camp, I care two hoots. I will laugh and mock whoever I think is nuts, and that includes you, you idiotic nutcase. You need help, big time. Analysts would jump over each other to go through the mess seething in what's below your scalp.
Admit it, you just love to see me coming to your cesspool, don't you. Freaking moron.
MariaS (dodocanspell)

And why the freaking heck are your cesspool visitors going through my blog searching for "jamie leigh jones"
Moronic you must have used a wrong link somewhere. What else is new?!

As sharp as a sock full of rocks, isn't she, kids?

I'm sure the irony of her leaving comments full of insults (however laughable) on this blog while moderating comments from uncivil "lefties" on her own blog escapes her.

Dog knows everything else does.

Weren't we to assume that *that* "MariaS" isn't the real deal?

Aside from all the two-way invective, isn't the substance of Dodo's post just a new twist on the notion of conscientious objection? That would have been a more interesting take on it... for me, at least.

But do carry on with your poo-flingng...

just a new twist on the notion of conscientious objection?

What evidence can you provide that that this would be "conscientious?" Paranoia or a selective understanding of the law aren't generally considered grounds for conscientious objection.

Bismark said...
This comment has been removed by the author.
2:56 PM

Evidence? Well, simply the idea of disobeying orders that are perceived as unlawful.

I don't really see a material difference between the two sides on this matter — albeit they are approaching it from different directions.

Well, simply the idea of disobeying orders that are perceived as unlawful.

Perceived doesn't cut it. The orders *have* to be unlawful. And since these types (wingnuts) aided and abetted the Bush administration for 8 years while it distorted the concept of lawfulness beyond recognition, they have a lot of nerve presenting themselves as a vanguard against the violation of the rule of law.

um... dodo's post is entitled "The world would be a dull place without American nuts" Clearly dodo thinks that the people cited in the link in her post are "American nuts"

She is right in this case. Where would we be with out batshit crazy looney tunes to mock?

I did quite well before 9/11. Then the batshit crazy loony tunes started being taken seriously by the media.

If we didn't have them, the news media would have to go back to doing real reporting.

@BB
You're right: Without the BSCLTs we'd be short one whole conservative blogosphere! Imagine that!

I can see how some folks might think that was a bad thing, though.

Who would there be to tell us that Steve Harper is, like, totally, the dreamiest piano player evar?

Who would there be to take on all those Islaminounifascicommies?

Who would be there to defend a Christian nation against ... well, everything?

Who would be able to fight the Iraq and Afghan wars from behind their keyboards?

Who else would be there to shriek whenever the HRC defended Ezra Levant's right to publish his crap?

Who would organize tea parties to prevent people from getting health care?

Yes, I can certainly see how the abscence of the BSCLTs might be seen as a negative ...

Okay, well maybe not, but I'm sure someone could. Like Dodo, f'rinstance.

Oh, and without them, we'd probably not have the Conservative Party of Canada as well.

Is it just me or does anyone else hear the frantic squeaking of the hamster wheel that powers DoDo's "brain" every time she stops by?

I don't think it's just me.

no, it delights her, and any grousing about it only ehances her delight.

"a new twist on the notion of conscientious objection?"

here in the states, we call it "mutiny." confounded idiom....