Not quite the conclusion I would have gone with. 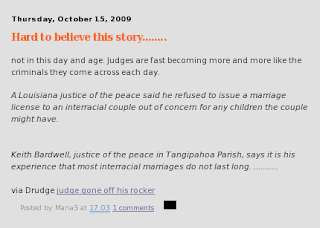 It occurs to me to suggest that if a justice of the peace from Louisiana refuses to marry an interracial couple, he's not acting like a criminal ... he's acting like a conservative.

That's just the conclusion I'd draw.

I'm really getting to enjoy her. We had a wonderful exchange last week that went like this (abridged).

Dodo: I'm positive the BBC is owned by Arabs. That's why they're so anti Israel.

Balb: The BBC is a public corporation. No shareholders.

Dodo: I mean BBC WORLD, which must be owned by Arabs.

Balb: BBC World is owned by the BBC. Public corporation.

Dodo: HA! I just found out that they have a loan from a Bank in Brussels, which as everyone knows is controlled by Arabs. Therefore they're owned by Arabs.

Dodo: Yeah? Well, you lefties all support terrorism, and I'm shutting down the comments now.

It was fun, but a depressing reminder once again that these folks have pretty much lost the capacity for rational thought in any form.

Indeed. It's all very entertaining until you realize that not only does Dodo not ever, ever, ever, get a joke, any joke - she also get very sniffy and hissy about being the butt of the joke, as a result of her own ignorance and obtuseness.

As I just posted on stageleft's blog, we have laws against discrimination based on sexual orientation and yet Conservatives will argue that religious and civil authorities should be allowed to refuse to marry same sex couples. I see that as no different than refusing to marry interracial couples, quite frankly. It's the same bigotry and intolerance based on a primitive and illogical political belief that people should not be treated equally under the law.

hehehe, Balbulican. I remember that exchange. there's nothing quite like trying to argue with a 'Don't confuse me with facts, my mind is made up' type of individual. It's ultimately useless cuz the truth is really irrelevent to the opinion at hand.

as to Dodo's latest posting, I have no idea what she means. I just don't see any connection with judges and criminals in this cas.. unless she means that the judge is a criminal? in which case she's right.

And as to calling this batshit crazy loony tune justice of the peace a conservative instead of the racist that he is, cc, is not only disingenuous on your part but down right silly. The man is a racist. Period. Full stop. End of story

You know, BB, I'm starting to understand why you were kicked out of the Blogging Tories.

oh, cc, shame on you. You're reduced to name calling?

Ah, but then that's long been your stock in trade.

It's far easier for you to snark than actually actually come up with cogent thoughts on an issue.

I'll try somehow to live with the crippling shame of your disapproval.

Why would they kick BB out?

He's not a racist. He's an interracist. And he's not saying different race couples shouldn't be allowed to marry and have children, he's saying he doesn't want to perform the ceremony because it goes against his beliefs that they are.

He's not nearly as extreme, in my opinion, as all those good Christians, etc, who argue that same sex couples shouldn't be allowed to get married at all, let alone have children.