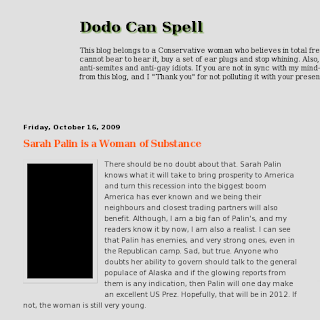 It's just creepy, isn't it?

Fuck, that woman is stupid.

"COURIC: Why isn’t it better, Governor Palin, to spend $700 billion helping middle-class families struggling with health care, housing, gas and groceries? ... Instead of helping these big financial institutions that played a role in creating this mess?

PALIN: Ultimately, what the bailout does is help those who are concerned about the health care reform that is needed to help shore up the economy– Oh, it’s got to be about job creation too. So health care reform and reducing taxes and reining in spending has got to accompany tax reductions."

These people are hopeless.

Someone institutionalise that psychotic before she becomes a danger to Canadians. Like the next time she votes...

Seriously, the evidence of Palin's executive excellence is to be gleaned from "talking to the general populace of Alaska?"

Hey Maria Sara Nooners? The next time you migrate, go there.

"Fuck, that woman is stupid."

As a former mayor, and as a former Governor, and as someone who can see Russia from my kitchen window, I know what's best for America even if I don't know much about America

Yes, Palin is indeed a woman of substance. We're just waiting on confirmation of which substance she's full of.