Dear Woodstock: Blogging Tory "Neo Conservative" has your back: 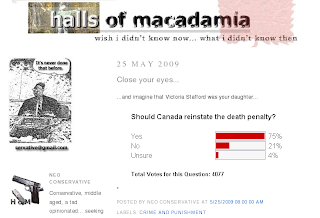 Well, that's when he's not telling you to suck it up and stop being such pathetic attention whores.

This has all the makings of a two-fer for Neo: he can tell a bunch of whiny, bleeding-heart liberals to fuck off with their grieving, teary exhibitionism, and still revel in the delight of someone getting snuffed.

The only way this could get any better for Neo is if someone was black. Victim. Executed murderer. Mourning parents. Doesn't really matter -- it all works for him as long as someone ends up dead. And black.

LOGIC, TORTURED AND OTHERWISE: Not surprisingly, in demeaning Woodstock's formerly-worried citizens as a bunch of useless, self-absorbed attention whores, Neo has to carefully describe how that differs from people who line the highway to pay their respects to Canada's military fallen because, apparently, that's different because ... well, I'm not really sure but, as best I can tease it out, having a candlelight vigil before learning of Tori Stafford's fate is utterly useless since it does nothing whatsoever to get her back and, after all, that's all that matters.

However, employing that kind of logic, one could similarly denigrate those pompous, narcissistic prats who hold "Red t-shirt Friday" rallies to show support for our troops. After all, that kind of public whoring technically does no good for the troops whatsoever. Certainly, it doesn't protect them from snipers or roadside IEDs. Really, all it does is give a bunch of attention-starved yobs the chance to preen and posture in front of the cameras and feel good about themselves. Not a lot of difference as far as I can tell.

But I'm sure that's still different. It must be. Otherwise, Neo would look like a hypocritical jerkoff. And, God knows, we can't have that.

Finally, neo's back from whatever he spent the day doing. Unusual for him.

Now he has a problem. His other commenter wants to put chips in kids, which he thinks would have saved Tori. I pointed out the chips won't work except to identify someone you can get within a couple of feet of a chip reader. You can't do an aerial scan, or run trucks all over the place to scan for a chipped kid.

Now that neo's deleted that, will he use it anyway? I'm sure he wishes he'd thought of it. Will he add plagiarism to his already numerous manifestations of dishonesty?

I saw your comment earlier. You mean Neo deleted it? But it was perfectly harmless, and technically accurate.

Jesus, what a total pussy that guy is. I swear, if he ever had to have an actual argument, I'm betting he'd totally piss himself in fear.

He sure talks big for such a pathetic coward.

P.S. Did you keep a copy of it? If you did, post it here and we'll keep track to see if he takes credit for it.

I have copies of everything I have ever commented there.

================= neo may 25 (deleted)
Ok, and the boy that froze to death in Barrie. Parents fault too? What about autisitc chidren? Wander away on their own, sleepwalking?
People chips don't work that way.

They work like dog chips. You find a stray dog, (or a wandering Alzheimer patient someday), and you can identify them with a chip reader. It would work on a kid too, once you found them.

But for scanning from the sky or even from trucks running up and down streets, they just don't have the range. If it was an active chip, it would need a battery similar to what you find in a cell phone. Not the size of a grain of rice. For a passive chip, the radiated power to activate it from more that a few feet to get a readable response would be unsafe.

That's it? That's the comment that so terrified that whiny pussy that he had to delete it? That's hilarious. Apparently, those idiots really are as scared of science as we've heard.

There's a company in the US selling watchlike things that you give your kid that does GPS tracking within 2 metres...

All I keep thinking is armless pedo victims...

He decided some time back to delete anything I say, usually with one of about three different dismissive comments of his own.

So I continue to provide him relevant, on topic comments, causing him to stalk his own blog 24/7 so he can quickly delete them, usually within minutes. Then I stay away for a few days, and do it again, sometimes it would seem he'd been stalking it the entire time.

As far as I understand it, my comments would still appear in his blog feed no matter how fast he deletes them, though I could be wrong about that.

In this case, of course, he is against chipping anyway, because of the slippery slope that would probably involve chipping his arsenal. He's already against marking guns based on UN standards as they enter the country. I think his idea is that instead of restricting the number of pistols floating around, he like to restrict members of those "cultures" for which there are higher than average statistics on gun violence.

I wonder, does he also dislike people going to funerals and funeral homes?

Not one of the people who came to the hospital or the funeral home or funeral made my mom any less dying or dead but each and every one of them brought some measure of comfort.

The only way they could have been more helpful was if they'd brought whisky.

And we have a winner! Today, neo decided Michaele Jean eating seal is somehow like martyred missionaries in the 1600s. He now claims he received emails and added a diectionary definition of aboriginal on the main post.

But only AFTER he read and deleted this:

I don't think Jean would have a problem with anyone hunting for their own subsistence. But people don't need pistols to hunt, and pistol rights is your only concern in this.

In fact, how many missionaries were ever killed? The three with the Hurons (axe heads ahoy!!) but other than that...

Why does anyone assume anyone has a problem with hunting? I don't eat most meats (hell I hardly eat it at all) but if you want to, good for you. And if you want to get your meat by killing it yourself, then at least you're being fully honest.

Meh, from what I understand those three kind of deserved it.