But let's leave off the eliminationist rhetoric -- it might be awkward. 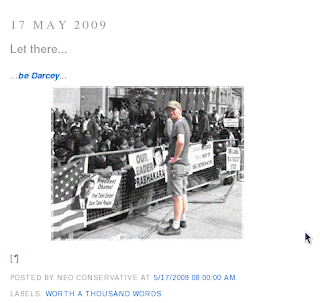 Hmmmmm ... I could have sworn there was more to that story. Oh, right, here it is: 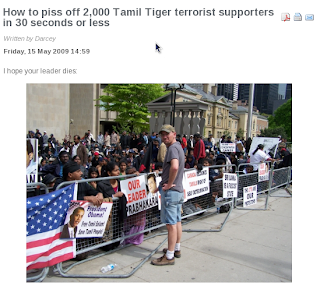 Oh, come on, Neo ... it's not like you've ever been embarrassed to celebrate the violent deaths of foreigners. Why start self-censoring now?

In other news, Blogging Tory shlemazl wants to assure you that:

Non-Jewish Tories do not tolerate bigotry.

Sometimes, this job is way too easy.

Non-Jewish Tories do not tolerate bigotry because they don't know what tolerate and bigotry mean. The stupidity it burns!

$5 says those fingers are much larger than the actual unit.

Glad to see an uncensored free speech zone, its getting rarer and rarer these days!

You are spot on about that Shlemazl character being a lying piece of sh*t, his favourite tactic seems to be labelling anyone he disagrees with, with the labels increasing in hysteria and seriousness according to your ability to prove him wrong.

The other tactic he favours is spoofing disgusting comments from people who are able to use reason to expose his ignorance, and then enabling censorship (or CM) and then saying he did it to prevent any more Nazi comments from people he has spoofed and labelled. All the while insulting them behind his screen.

He is the one who obsesses in pretty much every post over anti-semites and Nazis and all of that jazz and then staw mans it out to others.

A typical internet hardman and coward with nothing of substance to say.

The sentinel is spamming now?

If that is really his genitalia hanging out, isn't he doing something he should be arrested for? And this picture is published proof of the public indecency?

I mean, if that is his privates, he's exposing himself to the crowd and most especially a woman sitting right there in front of him.