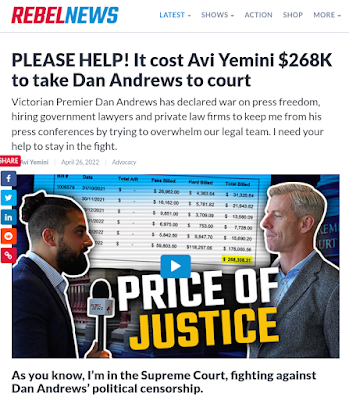 And is this really a case of "censorship?" Of course not, as you can read further down in that very piece:

So let's explain this one more time, as this is the same argument that  is being presented so dishonestly by Ezra himself.

No one is censoring anyone. Period. What is happening is that the monstrously unqualified and ineligible hacks from Rebel News are applying for official legislature press membership, and are being rejected because they don't satisfy the requirements, nothing more. Nothing stops any of those relentless liars from reporting anything they want; all that's being done here is to say that their applications for official accreditation to be a member of some national press gallery were found wanting, and kicked to the curb. That's it. That's all. And it is typically the mandate of every country's press gallery to make their own rules, and decide who qualifies, and who doesn't.

In short, there is no censorship of any kind happening here; anyone at Rebel News is still free to publish all the lies they want, and it's clear that that's exactly what they're doing. But Avi apparently doesn't like hearing that no one wants anything to do with him, so you need to send him at least $268,000 (and almost certainly much more), because someone hurt his widdle feewings.

And, in the end, he will still lose this case, and you gullible morons will be out hundreds of thousands of dollars that ended up in some lawyer's pocket, and nothing will have changed.

Except for some lawyer getting stupid rich. Because that's what this is all about.