So where DID all that money go?

As most people know, Rebel News' Ezra Levant recently convinced a truckload of gullible yobs to hand over almost half a million dollars to not only pay off an outstanding Rebel News loan in its entirety, but leave him with a wad of leftover dosh to blow any way he wants:

However, there is a nagging question in all of this -- given that Ezra was handed some $380,000 in late 2017 and early 2018, where did all that money go? It's a worthwhile question since, in asking for financial assistance, Ezra was asking his intellectually-limited groupies to not just help with paying off the outstanding loan, he was asking them to pay off the entire amount. Every penny. That is, he was making no offer to chip in any cash of his own, which leads one to ask -- did he simply not have any of that $380,000 left? And if not, where did it go? And here's the curious part.

Ezra himself admitted publicly that the initial loan was for ... well, let's let Ezra explain it himself:

OK, that's fair ... money to do more journamalism, and to hire new talent. The curiosity here is that, if one followed Rebel Media/News throughout 2018 and 2019, nothing seemed to change that much. If anything, it seemed that Rebel was shrinking, not growing.

Courtesy of the Intertoobz's Internet Archive, here's a shot of all the talentless hacks, yahoos and bottom dwellers on Rebel's masthead in early 2018: 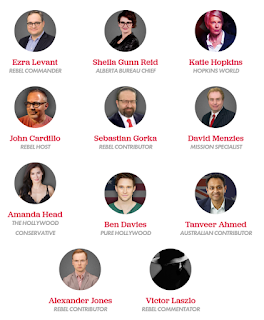 At that point, one would think that with a massive infusion of capital, a few more folks would have signed on. Alas, such was not the case, so that by late 2019, even after $380,000 to expand Rebel's operations, this is the pathetic group of hangers-on that were left: 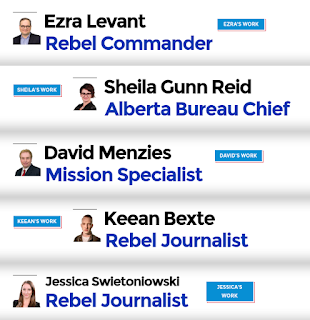 Five. All of five. Which inspires the obvious question -- if that money was not used for, as Ezra himself claimed, doing more journalism and hiring new talent, what in the name of Mutt happened to all of it?

Frankly, if I was a regular Rebel supporter and had been asked to bail Ezra out of a $380,000 hole, I might be just the slightest bit interested in where that original $380,000 had gone, since it doesn't seem to have gone to hiring or journalism.

I'm just curious, and wondering why Rebel's regular donors don't seem to be.

AFTERSNARK: Curiously, in his tweet above, Ezra promises that any surplus would be directed towards "hiring a full-time Parliamentary reporter." This is an odd promise to make since, as recently as December of last year, the PPG made it clear it was rejecting Rebel News for membership: 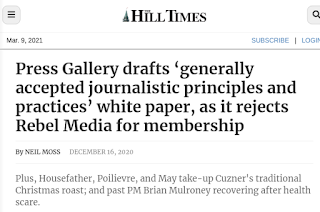 Under the circumstances, then, it's not clear the value of hiring a full-time Parliamentary reporter who has no accreditation to cover Parliament. That seems just ... weird.

The Rebel's revenue generation appears to direct contributions for pretty much any purpose to a single collection point; whether you're contributing to "lawsuit costs" to pay Ezra's lawyers, or Ezra's travel expenses to Britain to hold Tommy Robinson's hand, or paying off the Rebel's "mortgage (Ezra's term - I'm not sure the Rebel actually owns property), you are instructed to send your cheques to "donations". It's not clear exactly how the Rebel links each "donation" to the cause for which the donor intended it, and that probably doesn't matter: the site makes it clear that the Rebel may use contributions to pay its own operating and capital costs.
The nature of the Rebel's staffing levels and practices is a fascinating one. The original roster of alt-right C-level not quite celebs has fled in horror at what the site has become, and the residue is reminiscent of an especially untalented high school yearbook committee. There's one washed-up hack clinging desperately to the last media job he can find: a soccer mom and oil booster who rotates interviews with anti environment oil company lobbyists; a cheerful young black ultra-christian anti-masker whose prior experience was selling bling online; and of course, saving the Bexte for the last, the furious albino Rhodesia booster for whom the entire universe is a demonic conspiracy engineered by Justin Trudeau.
To quote the REAL Elvis: I used to be disgusted, now I'm just amused.
The Rebel's Alexa rating (which Ezra used to boast about) tells the tale: in the last ninety days alone they've dropped by 1.8 million globally, daily page views per visitor have dropped to 1 (a decline of 27%, and the average reader now spends 18 seconds on the site (a drop of 85%).

For clarification, that was never a mortgage per se. It was, in fact, a promissory note for funds loaned to The Rebel. Whether there was any kind of asset securing that loan is a whole other matter.

Hum. At this rate, soon they'll be out of business and you'll have to find some other grifters to pants.

Interesting that the money borrowed from "a friendly supporter" is now being referred to as "our bank loan."

You never know that to believe with Ezra.

Other than that, the HelpRebelNews.com campaign was ALSO for pandemic relief to keep staff. Mar 26 - 'We have 16 full-time staff' Ezra claimed to have lost 30k/mo.

So Rebel did hire one journali- er, IDF gymster, who in turn is already producing 2 campaigns, freeavi and save_victoria_australia.