Now that Ezra Levant and Rebel News have been given the monetary kick-in-the-nads from YouTube in terms of demonetizing their vile, rancid, racist, xenophobic, anti-Semitic, white nationalist rubbish, it behooves all of us to wonder whatever became of that vaunted Rebel Media "app" from, lo, those many years ago: 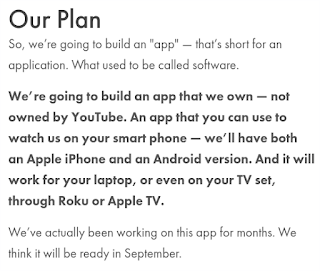 for which the rubes, marks and yokels from Red Deer and Lethbridge did cough up for Sheila's chicken bucket: 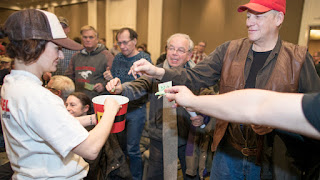 which, lo, brought in many, many shekels: 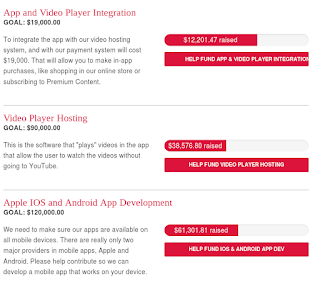 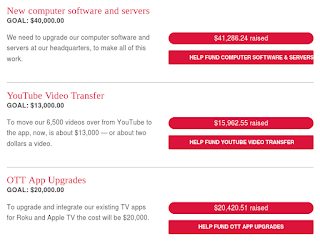 Which inspires one to wonder ... whatever became of that app and all that money, and why is that app not the go-to portal for all things Rebel News by now? Why have the teeming, unwashed masses of Rebel Nation not glommed onto this new-fangled technology like Sheila Gunn Reid on a corn dog, oh, wait, there's the problem:

Apparently, even the intellectually-disadvantaged citizens of Rebel Nation have the sense to not want Ezra Levant or Keean Bexte rummaging around in their underwear drawers or private photo albums.
Good for them.
P.S. It's worth noting that, as with Ezra's recent "Help meeeeeeeee, they're calling in my loan!" begging bowl, Ezra insists that this recent YouTube development is a huge shock, he had no idea, it came out of nowhere, and so on and so on, imparting a sense of urgency, etc, etc. This is, of course, just as much nonsense as it was before, as the very letter Ezra displayed during his tear-soaked begathon referred to "repeated violations":

so there is no way this came as any sort of surprise. In short, Ezra knew this was coming, but refuses to admit it. Same as it ever was.
AFTERSNARK: It's interesting that Ezra insists YouTube pulled the plug on Rebel's monetization with no warning:

when, as you can read, YouTube clearly explained that Rebel News was guilty of "repeated violations." I just thought I'd mention that.
Posted by CC at 4:31 AM

It's amazing how much Rebel News news is about Rebel News. It's a fucking miracle they have time to talk about anything but themselves.

Ezra's wide-eyed protestation of baffled innocence is always enjoyable, and a splendid opportunity to enjoy a master class in misdirection (well, "Master" class if the learners are very, very dim.
In this case, you don't really have to dig too deep for violations of YouTube's terms of service.
a) The Rebel has repeatedly used its site and its videos to celebrate, and to indirectly advocate violation of masking, social distancing, and closure regulations.
b) The Rebel has encouraged arriving travelers to flaunt quarantine requirements.
c) The Rebel has claimed that Dr. Theresa Tam "worked" for the WHO, covertly served China in that capacity, and worked against Canada's interests in some ill-defined but vaguely racist conspiracy theory - in effect, accusing Dr. Tam of treason, although with enough weasel wording to avoid actual prosecution.
d) The Rebel has tried to imply that Justin Trudeau and the military conspired to cover up cases of COVID-19 brought back to Canada at the end of the world Military games. Again,careful weasel wording that got vaguer and vaguer as more and more Rebel commenters pointed out the utter absurdity of the claim (primarily because it all happened before COVID actually reached North America).
I could go on, of course, as could any skeptical Rebel reader. But trying to prove that Ezra is a dishonest shill without a shred of integrity in his body is about as challenging as finding evidence that water is wet.