And so it begins ... the disintegration of Rebel News.

If you were paying attention, you'd have noticed that, over at Rebel News' masthead, former citizen journalist Tamara Ugolini is no longer present.
Not so long ago, her masthead page appeared thusly:

Prediction: Christian whackjob and conspiracy loonbat Drea Humphrey will be the next to go. Let's watch.
AFTERSNARK: Is it worth mentioning that Ezra Levant hoovered up close to half a million recently, explicitly for the purpose of hiring new people? 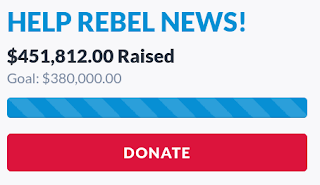 If I was an enterprising journo, I'd be asking the recently-departed Ugolini what she thinks of all this. But that's just me.
BONUS TRACK: It's hugely entertaining that, in a "media outlet" with only seven listed reporters, there is a Rebel "Commander," a "Chief" reporter, a "Chief" Australian correspondent, a mission "specialist" and the like. That all sounds vaguely familiar, oh, right ...

So, basically The Rebel's entire financial plan is to run from "crisis" to "crisis" and beg for money (which the rubes happily deliver up to him), and the content production is little more than a façade for the internet begging operation.

Ugolini's arc at the Rebel was an interesting one. Before her Rebel stint, her public persona was limited to the usual "concerned housewife" petitions and committees. Dave Menzies cast her as the recurring victim in one of his earlier COVID series of skits: you know, the kind that begin something like "An innocent, law abiding citizen found herself brutally criminalized last week when brutal cops viciously accosted and humiliated her simply for going for a walk." The setting was a beach near Coburg, where innocent, law abiding Ugolini somehow managed to get multiple warnings over several days for violating access regulations. She was certainly an improvement over Dave's usual fake victims, most of whom look a little meth-addled, are missing teeth, and need to be extensively cued by Dave. ("Would you say that this refusal to let you eat at a closed food court and swear at the mall cops was an intolerable breach of your sacred right to freedom of speech, the linchpin of democracy so many of our grandfathers fought and died for?" "Uh, yeah."

After it was pointed out by a skeptical observer on the Rebel site that Ms. Ugolini and the Menzoid should probably stop pretending to be astonished when the police respond negative to multiple deliberate, provocative violations performed for the camera, the Rebel mercifully stopped pretending she was a victim and proclaimed her a "reporter". She's been happily dribbling minor interviews with friends and neighbours into the Rebel pool; not a great success, as she lacks Dave's tragic "This Is The Last Job I Will Ever Have" despair, Sheila's irritating buzz-saw whine and primitive redneck energy, Drea's blissed-out oblivious naivety, or the absolutely fascinating trajectory that's taking Keean farther from reality every week.
She just had a baby, and she doesn't seem quite as stupid as the others: I suspect she may be quietly exiting to enjoy her maternity and leave the Rebel behind on good terms.