It doesn't get any funnier than this.

The only thing more delicious than Erin O'Toole exposing his own party as a bunch of scientific illiterates is Ezra Levant mocking him for it. 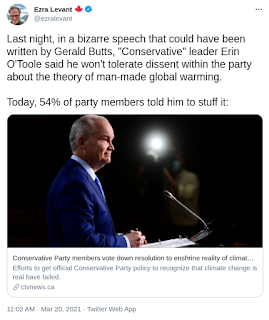 In related news, the CPC -- by a wide majority -- rejected the germ theory of disease, a heliocentric solar system, and the right of women to decide what to do with their own bodies.