I can't wait to see how this ends: 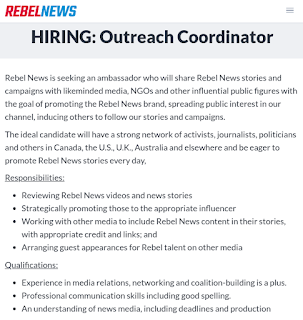 Well, well. I wonder if this is a first step in Ezra's strategy strategy from the diseased cesspool he created. Pure speculation, of course, but consider:
- the "job description", such as it is, is pretty much all Ezra has been doing - desperately trying to broker new relationships, expand the network, and trying with no success to lever the Rebel into the landscape of Canadian media.
- as indicated by their chaotic "recruitment efforts", the Rebel has absolutely no strategic focus left. On one hand they claim to be recruiting multiple "reporters", an in-house litigation specialist, an intern (i.e., free labour) and now this bizarre amalgam. On the other hand, every new intake over the last two years has dropped the quality their "journalism" even further, culminating most recently in the recruitment of two goofy Gen-Z kids whose idea of journalism is to stage an argument with the cops (no, wait, that's actually the entire Menzies canon of journalism practice). And their financial state is such that their new Beavis and Butthead combo have to beg online for a few bucks to rent a car to get to their demonstration in Montreal.
- The Rebel brand is toxic. No advertiser will ever use them; no credible medium will ever quote them except to mock them; no alumnus of the Rebel will ever get a job in real media or politics outside the lunatic fringe; and the audience they reach is now SO marginal that the folks who once found them a useful, uncritical mouthpiece are losing interest. Yes, if you want to reach the ultra-right conspiracy theorists with a pathological hate on for Justin Trudeau, the Rebel is your niche - but why would you want to?

This suggests that the Rebel's readership, revenues, liquidity, quality and personnel are circling the toilet bowl pending the final flush. You suggested in an earlier post that there may be an alliance pending with the Epoch Time; however odious ET may be, I'm not sure they'd want to defile THEIR brand through association with the Rebel. ET is at least professional - the Rebel grows more hilarious amateurish with every week.

So no plan, no real assets, no credibility, no talent pool. How does Ezra escape? If I were a cold-blooded advisor without morals, scruples or a conscience, I'd say: groom a successor, hand over the company with its minimal assets, huge liabilities and poisonous reputation to a bunch of newbies too dumb and enthused to understand what they're taking on, exit to launch an exciting new venture, and avoid the looming bankruptcy. But you'd have to be pretty cynical to suggest that's what's happening.