Via Chester over at The Vanity Press, we learn that President Chimpy McChimpster is going to get his very own Purple Heart because ... oh, hell, let's just go to the transcript, shall we?

Thomas said he and his wife came up with the unprecedented idea to present the president with the Purple Heart over breakfast one morning a few months ago as they discussed the verbal attacks, both foreign and domestic, the commander in chief has withstood during his time in office.

"We feel like emotional wounds and scars are as hard to carry as physical wounds," Thomas said.

I think I see Thomas' point. I mean, you have your emotional scars: 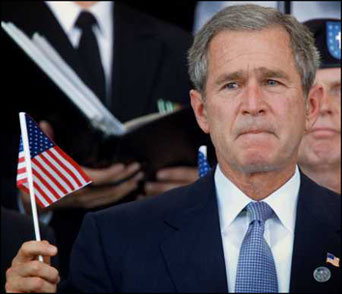 And then there's the other kind:

Yes, I can see the striking similarity. Well, except for the missing arms thing. That part's different.

IN ALL FAIRNESS, there's a lot less to this story than initially meets the eye.

When I first read it, I thought, "How the fuck can a veteran award a Purple Heart to Chimpy McChimpster?" But that's not what's happening. If you read the actual article, all that's happening is that vet Bill Thomas, who has three Purple Hearts, is giving one of them to President George W. McRetard. That's all, nothing more. And since they're Thomas' Purple Hearts, he's welcome to do whatever the hell he wants with them. Big whoop.

What is asinine is Bush's reported reaction:

"He said he didn't feel like he had earned it," Thomas said, noting the president looked thinner in person than on television.

Well, duh. But that's not really an issue here, is it? Bush certainly hasn't earned being awarded a Purple Heart but, again, that's not what's happening. Having someone else give him one is equivalent to an Olympic gold medalist giving his medal to his mother. No one's going to be dumb enough to argue that she didn't earn it, fer Chrissake, are they? But this utterly meaningless ceremony gives Bush the chance to do his self-deprecating "Aw, shucks, I'm not worthy" routine. Didn't "earn" it, George? Well, no, but in this context, what the hell does it matter? It's not official so nobody gives a fuck.

In short, all you have to this story is a veteran who's so stupid, he doesn't understand how badly Bush has treated the military in general, plus a chickenhawk president who makes a big deal about downplaying that he didn't "earn" a Purple Heart when that wasn't even an issue.

Imagine if a draft-dodging Democrat accepted a purple-heart from a loyal partisan vet.

It's actually beyond disgusting that bush II accepted this medal.

Last 7 or 8 posts have been really sub-par. Try to pick it up a bit, will you?

If he gets a purple heart, then it's only appropriate that he also recieve a combat wound.

what's up there anon #1, couldn't find a way to work brave, brave into it?

But a purple heart so captures the essence of W.

I'm going to send Bush my "Happy Pumpkin Face" sticker I got when I was in grade 3 for winning the "scariest Hallowe'en costume contest." Then I'm going to send Bill and Georgia Thomas of East Bumblefuck, Texas a prescription for Thorazine. How fucking deluded can you be?

FTR - I knew this wasn't an official award. But it's still disgraceful that a draft-dodging war-monger feels that he can accept this medal in return for his "emotional" wounds.

Especially since he's in such a bubble that he didn't even know about Hurricane Katrina for two days, ... i'm sure he's done just fine ignoring the insults that have been directed his way.

Someone should pretend to send dumb-booya back to the front with the other walking wounded. Let's see what's his pretend excuse for not going will be.

It was a photo op. Plain and simple. And, IIRC, it is illegal for him (GW) to actually wear the medal. Don't have the energy to research that, though.

aw, give george a shiny. then let him lead by example, the way leaders of old did, on the battlefield. then maybe he could earn himself a medal of his very own.

All you libruls bashing the President of the United States of America for accepting a purple heart only embarass yourselves. Why, the First Lady confided on the Today Show this morning that no one has suffered more from the war in Iraq that the President. See http://americablog.blogspot.com/2007/04/laura-bush-wants-you-to-know-that-when.html What's more, if the supermarket tabloids can be believed, the President suffers so much he has started drinking again and it's gotten so bad the First Lady has moved from the White House to the Hay Adams Hotel (which is a nice place to stay if money is no object).