Dick in a can.

I came across this gem via The Poor Man. Ladies and gents, I give you Dick Cheney's ride, the Deathstream: 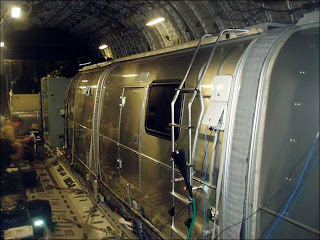 "Airstream’s appeal seems to have few limits, and indeed a powerful world traveler recently provided proof of its persistent appeal. On a trip to Asia in February, Vice President Dick Cheney traveled in an Airstream — inside an airplane.
Mark Silva, chief of the Washington bureau of The Chicago Tribune, accompanied the vice president as the press corps’ pool print reporter. The group flew on a huge gray C-17 cargo plane that the Air Force calls the Spirit of Strom Thurmond, in honor of the late senator. Mr. Silva said that when he boarded he noted the familiar outline of the Airstream roof inside the vast fuselage."

If it walks like a duck and quacks like a duck, shoot a lawyer in the head. Dick Cheney's, Even My Friends Aren't SafeTour just keeps rolling along.
Posted by Lindsay Stewart at 1:39 PM