claiming that, well, that he's being spied on by, well, everyone, I guess ... tell you what, I'm just going to let a recent, anonymous commenter here at CC's House of Snark lay it all out for you:

"Speaking of misinformation; here's a fascinating example of Rebel spin. Ezra's latest begging bowl is labelled "stop spying on us!" He is shocked - SHOCKED!! - to discover that the American and Canadian military are SPYING on the Rebel, and demands...well, as always, it's not quite clear what he's demanding. Turns out that multiple academic, internet and military research groups in Canada, the US and Australia, were curious about the ways that activists manipulated online discourse and generated tons of toxic misinformation about their political enemies through means like fake YouTube channels and Twitter feeds. They did a painstaking, impeccably detailed analysis of the Canadian media landscape, backtracking posts, stories and comments from 65 different media. And guess what? They decided to devote a special section of their report to the Rebel, because...well, read it for yourself."

Whereupon said commenter points us here, to a suitably scholarly article entitled, "The Role of YouTube during the 2019 Canadian Federal Election: A Multi-method Analysis of Online Discourse and Information Actors," which picks on Rebel News/Media only because that particular septic tank of a media outlet is such a fucking gold mine of dishonesty and misinformation related to one particular metric.

You need to read the whole thing to appreciate the high profileness of garbage sites like Rebel News and the equally garbagey True North Centre: 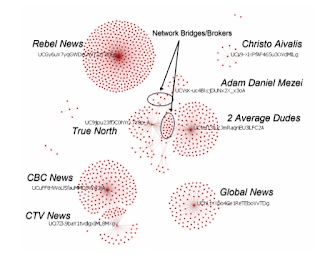 You need to make yourself comfortable and read the whole thing but, in the end, the takeaway here is that, if anyone is doing research into crappy, worthless, dishonest online news sites, well, they're going to end up at Rebel News no matter what direction they're coming from. That's not "spying," that's "research."

CURIOUSER AND CURIOUSER ... Over at Ezra's White Nationalist Bar and Grill, one finds the following accusation:

What's curious is that, while the above links to the U of Arkansas and to "SpyonWeb," there is no link to the alleged report, "Canada Elections Cyber Forensics Analysis." One would think that, if one were screeching about a report that demonstrated, you know, skullduggery and shenanigans, one would, you know, let readers read it. And yet, there is no such link in the entire article, and even DuckDuckGo seems to know nothing about it: 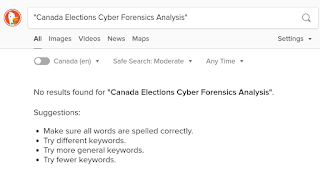 This is not to suggest that the report does not exist, only that, if it does, it's rather odd to not produce it if it's the basis of your current spittle-flecked hysteria.

AFTERSNARK: It appears that the aforementioned scholarly article is the one Ezra is referring to, since its authors all hail from the U of Arkansas at Little Rock, and there is, in fact, an emphasis on Rebel Media in that article, and for a very good reason, as the authors explain: 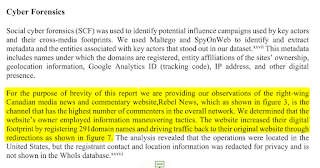 In short, Rebel Media got extra attention for the simple reason that it was the most prolific generator of total crap and manipulation related to one of a number of analyses that were done. This should not come as any surprise.

BONUS TRACK: If you look closely above, among those Rebel domain registrations is "andrewcoyne.ca", which takes you to ... oh, go see for yourself.

Perhaps someone should mention that to Andrew.

P.S. There will be a Part Deux to this piece, so you might want to check back this weekend. It might be worth it.