Rebel News and Epoch Times -- a match made in Mordor.

Oh, my, and here's an interesting development. A recent commenter threw out the slightly surprising suggestion that Rebel News has, in some nebulous way, climbed into bed with the repulsive rubbish that is the Epoch Times:
"It will be interesting to see how this new alliance with the right wing "Epoch Times" propaganda machine works out. I suspect there may be quite a bit of new money pouring in [to Rebel News] soon."
I was unaware that Rebel was hooking its wagon to an even more repugnant publication ... until I noticed this piece from just yesterday: 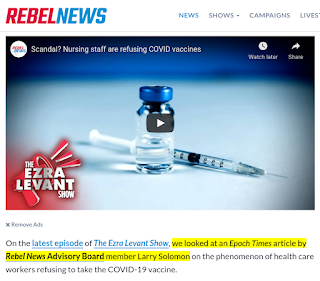 Sure enough, Rebel News has an "advisory board" and, sure enough, it includes one Larry Solomon, whose current ideological background should be cause for concern: 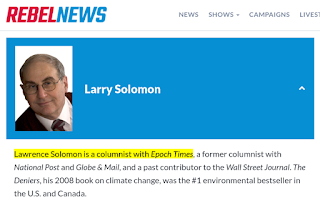 Is one allowed to wonder whether Rebel News has quietly just sold itself out to Epoch Times? That would be an exciting development, indeed.
BONUS TRACK: It was just last fall that the New York Times did a piece on the global media empire that is the Epoch Times: 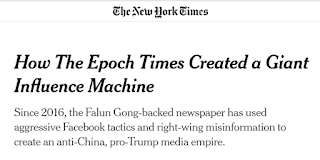 and the characterization of being "anti-China, pro-Trump" would seem to mesh perfectly with Rebel News' recent biases. Perhaps one should start keeping track of the frequency with which Der Rebel starts regurgitating Epoch Times propaganda.
OK, I'M STARTING TO BE CONVINCED: As my aforementioned commenter suggested, there appears to be a "new" alliance between Rebel News and the vile rag The Epoch Times, evidence for that from only three days ago in a Rebel News piece that simply gushes all over that vile rag, as you can read here: 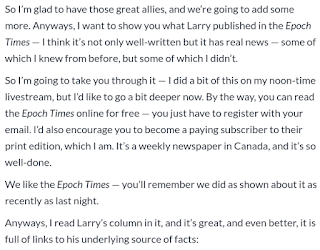 Dear God ... if Ezra pandered any harder to that rag, the two of them would need a room and a box of Kleenex. This will indeed bear watching.
Posted by CC at 9:45 AM

Not sure how formal the ties are at this point, but the links have been pretty clear for a long time.
a) Epoch Times was a pretty minor player for years, largely devoted to slamming Communist China, cheering for Taiwan, and promoting the Falun Gong. They were constantly predicting the "imminent" fall of Communist China on the basis of secret memos they had discovered. Ultra right wing, pretty fringe, and of interest principally to Taiwanese expats in North America. I used to pick them up for free at the grocery store because the slightly waxy texture of their newsprint made it perfect for wrapping up meat scraps for the compost.
b) They experience a huge surge when they transferred their focus to their online edition and began aggressively promoting Trump during his first campaign. The American ultra right began to quote them as a credible source on China stories; and as Trump ramped up the anti-China vitriol over the course of his term (primarily, I think, to weaken their position in his failing trade negotiations) you started seeing their take on Hong Kong, lurid organ transplants and Chinese infiltration everywhere. Then, of course, came COVID; and the Epoch Times, with their fondness for conspiracy and their loathing of mainland China, really came into their own.
c) The Rebel was already courting the conservative elements of the Chinese community on such issues as repudiation of the Ontario Sex Ed curriculum. That exercise made for some very strange bedfellows (har har) indeed, with the Rebel providing grudgingly sympathetic voice to conservative Muslim community members who, like Ezra, objected to the use of obscene words like "vagina".
d) The Rebel's interest in China inexplicable surged during the Hong Kong democracy demonstrations, to the point that they actually sent two of their worst "reporters" to Hong Kong to stick microphones in the faces of demonstrators, attend press conferences, and generally display their complete incomprehension of Hong Kong's colonial history and relationship with China.
e) In the past couple of years, the Rebel's editorial position on pretty much all things East Asian have begun to align perfectly with those of the Epoch Times, and they are pretty much following ET's editorial stance on every significant story, while bring their own "we don't really understand what's going on here but doncha HATE TRUDEAU" spin to it.
f) ET's journalism and editorial standards are much, much higher than the Rebel's, and I can't seen them having much interest in the amateurish, self-centred squalling the Rebel's crew have sunk to. Interestingly, the Rebel seems to have come up with money for a few new positions. One of them is a "reporter" tasked with covering Chinese issues. No actual background in journalism, reporting or research is required; however, the successful applicant "will be an advocate for democracy in China and a defender of the people who are persecuted by the CCP (Chinese Communist Party), such as Hong Kong democracy activists and ethnic and religious minorities both abroad and in Canada." Sound like the kind of objective journalism we've come to expect from the Rebel, and of course, it lines up perfectly with ET's editorial stance. Wonder where the Rebel is getting the money for that one?