It becomes curiouser and curiouser as to just what right-wing demographic the mouth-breathing yahoos at Rebel News are trying to appeal to, given their scorched-earth policy regarding so many of Canada's conservatives and political parties.

Lately, Rebel Obergruppenfuhrer Ezra Levant has been on an absolute tear, trashing CPC leader Erin O'Toole every chance he gets, like here: 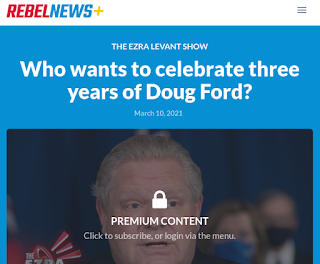 At this point, given that Ezra survives entirely on the largesse of Canada's conservatives and stupid people, one has to ask -- isn't he sort of pissing off the very people whose wallets he should be trying to open?

And Ezra is going after Jason Kenney as well. Seems like his audience is getting smaller by the day.

Well Harper is coming back on the scene ???