Sorry ... why exactly are we over there again?

The Afghan president, Hamid Karzai, has pardoned three men who had been found guilty of gang raping a woman in the northern province of Samangan.

The woman, Sara, and her family found out about the pardon only when they saw the rapists back in their village.

“Everyone was shocked,” said Sara’s husband, Dilawar, who like many Afghans uses only one name. “These were men who had been sentenced and found guilty by the Supreme Court, walking around freely.”

Canada's military -- dying overseas so that Afghani men can rape Afghani women. And get away with it.

Canada's "Support The Mission" Blogging Tories must be so proud.

P.S. I would be remiss if I didn't take the obligatory cheap shot: 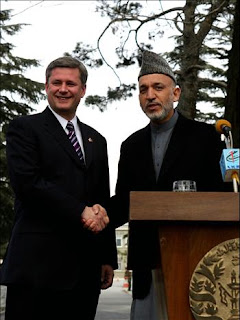 Remember ... it's the company you keep.

WHOA, NOT SO FAST: As thwap points out in the comments, there's some doubt as to whether Karzai actually signed the pardon in question. But it does appear to be his signature, so I think someone has some serious 'splainin' to do yet.

You think Harper is happy/mesmerized because of the Papa Smurf hat?

I read about that. Karzai says that he didn't sign anything, ergo; his signature was forged.

Whether Karzai signed the pardon or not is irrelevant - it was signed in the name of his government.

If it was forged, and it stands as legitimate, then it damns Karzai's government as corrupt.