For people who love to whinge on about "fake news," Canada's right-wingers spend their time doing little more than inventing organizations, then joining them for the PR value in being part of those organizations. Where to even begin?

The obvious example is one "Rebel News," which someone once beautifully mocked as Ezra Levant's "vanity blog", and what could be a better description? Certainly not a media outlet in even the loosest sense of the word, the entire history of that dishonest, racist, white nationalist, anti-Semitic cesspool can be summed up as, "I'm Ezra Levant, and here's what grinds my gears. Send me money so I don't have to get a real job."

And when no one of any sense, taste, grace or sentience took Der Rebel seriously, Ezra proceeded to invent the "Independent Press Gallery of Canada," then promptly bragged as to how Rebel was an accredited member of the very press gallery he had just invented the night before.

Moving on to the utterly valueless and self-serving Justice Centre for Constitutional Freedoms (or "JCCF", pronounced "jerk off"), we have an alleged civil rights org that defends right-wing causes, invented out of thin air by (wait for it ... wait for it ...) right-wingers with causes to defend. Man, talk about convenient.

One is reminded of the time yet another right-wing bankrupt -- ex-Rebeler Katie Hopkins -- was pranked into accepting a fictitious award, with hilarious consequences: 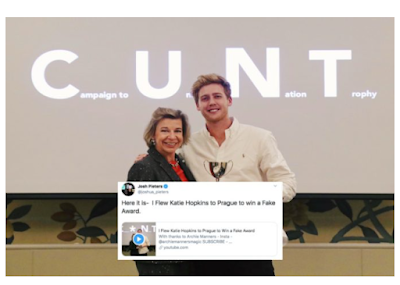 And if your humble scribe suddenly announces that Ezra Levant is the first annual recipient of the prestigious "Global Respect for International Freedom Truckers" award, well, you've been warned.

Can we all contribute to awarding Lich the first annual "Constitutional Unity for National Truckers" Award?