"In the criminal justice system, there are stupid lawbreakers, really stupid lawbreakers, and then there's Lloydminster's village idiot Patrick 'Lord Baron Twatrick von Loadenhosen' Ross, who has -- even in the midst of being a university dropout, convicted malicious defamer and undischarged bankrupt living at home at the age of 40 -- managed to outdo himself."

"This is his story."

It appears that the Twatster (even as he currently owes me $112K+ pursuant to a judgment for malicious defamation, and whose family has quietly signed over Patrick's ownership of a substantial chunk of valuable Saskatchewan farmland he inherited from his grandfather to a close family relative in order to conceal his assets from the collection authorities ... but I digress ... back to my story) is very well on the hook for substantial restitution charges related to a business owner that now has to change his business contact information and cards and letterhead because Patrick thought it would be a total hoot to impersonate said business owner and spend several hours putting said business owner's name and professional contact info on dozens and dozens of spammers' mailing lists, to the point where this businessman has no choice but to reset all of his own business info at considerable expense to finally stop getting calls at all hours of the day and night.

The stupidity involved here is that Patrick did all this -- which would appear to constitute criminal acts of harassment and identity fraud -- from his own hotel room in Grande Prairie, so that all of that nefarious idiocy was trivially traceable back to him via recorded IP addresses, to the point where even Inspector Clouseau or David Menzies could have broken the case wide open, the end result being that said business owner is now preparing documentation to file a claim for financial restitution for aforementioned expenses, estimated to fall somewhere in the range of $9,000 to $17,000, which Patrick will most definitely have to pay without having bankruptcy as an option since he's already in bankruptcy and bankruptcy does not work recursively.

And there you have it.

BONUS TRACK: Regular reader directs me to this, which certainly seems to describe the idea of surreptitiously transferring ownership of assets to conceal said assets from creditors: 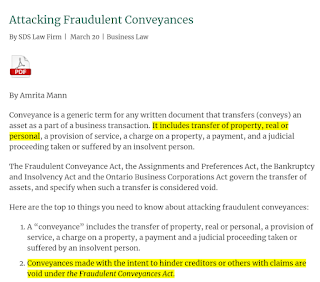 I was going to suggest that no one could be that dumb and yet ... here we are.

IT GETS FUNNIER. Seriously, as hard to believe as it might be, it gets funnier. There is little question that Patrick Ross will have to pay restitution to cover the expenses of a business having to completely re-do all its contact information. And from what I am reading on the social media thread covering all this, if Patrick is not able to pay up, he will go to jail, at which point the government will cover the restitution, and reimburse itself by paying itself the $5.14 per day Patrick would normally have earned working it off behind bars. Do the math: Even if we estimate restitution costs at a conservative (pun intended) $10,000, it would take Patrick over five years to pay if off.

It's hard to believe that someone might go to jail for over five years over a debt of only several thousand dollars, and yet ... here we are.

Actually, it still gets funnier. Only a few hours ago, Baron von Loadenhosen said that any employees that participated in a general strike should be fired by their employer. "No severance. No notice."

That's funny because, as I heard it, Patrick was fired from his gig in Grande Prairie for not showing up for work one Monday, because he knew the police were looking for him.

Gosh, I hope he didn't get any severance.

Same anonymous as above: I remember Patrick once bragging about how he was going to be getting a huge inheritance of some kind, so it sounds like that might be what he was talking about. If he now denies any inheritance, that earlier bragging could be used to show he's lying.

Also, since his mother already passed away and his father must be getting up there in years, wouldn't Patrick be getting a pretty big inheritance from his father? Or has the family pulled a fast one and re-assigned what he would get to another family member to hide those assets as well? Seems like you might want to contest the probate process here.

The Amazing Kreskin* tells me that our hero is going to spend months gleefully bragging how he's going to rip the plaintiff's lawyer a new asshole in the courtroom, and then fail to appear.

I hope to one day be able to read Mr. Ross's memoir.


*The Amazing Kreskin was a TV psychic back in the 1970s.

I'm not a lawyer, but I think that business owner should have claims against Twatsy beyond the money it costs him to get a new phone number and business cards. He has 20 years of sweat equity built into that phone number. Repeat customers, and new customers working with stale data, will likely be dialing the wrong number in the future. That wastes their time, and potentially hurts the business.

And the Ross family unsurprisingly appears not to be very bright. Even Conrad Black committed smarter white-collar crime than the Ross family's blatant attempt to conceal ownership of Saskatchewan farmland.

Also, if Twatsy really got himself fired from his job in Grande Prairie for not showing up to work in an effort to try to evade law enforcement, that's cataclysmically stupid.

It's not like the cops don't know the Lloydminster basement where they can find Twatsy if he's not working in Grande Prairie or hanging out in hotels.

While it's certainly conceivable that Mr. Ross decided that it was high time to go create more trouble for himself, I'm going to be a little skeptical here because of the lack of receipts. (Not that I spend any amount of time trawling through his trash - others much braver than I do that quite well)

However, the attempts to hide the land assets are ... interesting. Did he come into that inheritance before, or after, declaring bankruptcy. If it's the latter, I suspect that the creditors have first call on that property no matter what shenanigans the Ross family might have played to hide it.

If he came into it before he declared bankruptcy, and signed it over then, he might have a legal case to say that he did that voluntarily and it had nothing to do with bankruptcy.

MgS: I have been moderately reliably informed that the ownership of the land in question was transferred from Patrick to a close relative *specifically* to keep me from getting it. Beyond that, we will see how this plays out.

Oh my ... that's interesting all by itself. I have some awareness of how the relevant law works, and I don't think the courts - especially bankruptcy courts - are going to look kindly upon trying to hide a significant asset.

There's much more I'm not prepared to get into; I'm saving it for the inevitable hearing involving bankruptcy fraud. But if Patrick is unaware of the concept of "fraudulent conveyances" in the context of Canadian law, he might want to do some research.

It sounds like Twatrick is engaging in lawfare. He's hoping you'll give up pursuing him, or maybe that you'll make a mistake. Of course Twatsy doesn't realize that he's digging his legal and financial holes even deeper with these pathetic tactics.

I don't think this falls under the category of "lawfare" -- there's not much clever legal strategy in thinking, "Hey, I know, let's try and avoid paying a civil judgment by committing obvious criminal bankruptcy fraud!"

True, but Twatrick probably thought his scheme was ingenious.

Are you fucking kidding me?! Patrick got fired from his job cause he was evading the police instead of going to work?

That's criminal, no? Time to see Patrick sent off to the correctional in Saskatoon; it's a prison for medium offenders. Luckily it's not the federal max penitentiary in Prince Albert, where Twatsy's deranged mouth would surely get him beat up.