Wherein Ezra's lawyer got away with one, and it's now part of history.

Yes, I've been inundated with celebratory notes about Ezra getting his ass handed to him in both of his recent meritless SLAPP actions, but in following the links, I chanced across something I was utterly unaware of and I think it's worth noting for future reference.

It was back in 2017 that, during my anti-SLAPP hearing, Ezra's lawyer (whose name I will not mention here, even though it's easy enough to find if you give a crap) was arguing that my motion should be kicked to the curb, and one of the first reasons he gave (to my utter astonishment, as I was sitting right there in the courtroom and damned near fell out of my chair when I heard it) was that I had taken too long to file the s. 137.1 motion since the action had already been set down for trial.

That claim was not true.

That claim was not even remotely true.

In fact, it could not have even been possible as my then-lawyer had not even performed our questioning of Ezra, so the idea that the trial had already been scheduled was utterly preposterous. And yet, there was Ezra's lawyer, making that completely bogus claim to the Court in all seriousness. And what happened next was even more astonishing.

Upon hearing this claim, the judge looked decidedly skeptical and asked Ezra's lawyer to confirm what he had just said. Said lawyer, I'm guessing realizing that his bluff was being called, immediately back-pedaled furiously and admitted that he had mis-spoken. But it was too late -- the damage was done and that utter fiction is now an official part of Ontario jurisprudence as I discovered in this case from 2019, where people involved in arguing costs related to anti-SLAPP motions are now (you guessed it) using that utter fiction from my case as an argument: 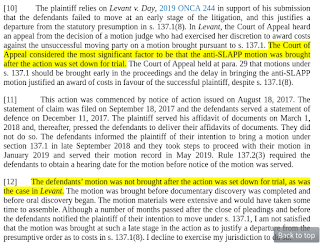 That's right -- given Ezra's lawyer's momentary blatant misrepresentation of reality, and the subsequent mouth-breathing incompetence of both the motions judge and Court of Appeal, something that never happened is now an inviolable part of Ontario jurisprudence.

I just thought you needed to know that.

Hang on ... Ezra's lawyer in your motion is the same guy that just got beat in these last two motions. Jesus, how little self-respect do you have to have to keep working for Ezra year after year?

The Law is an Ass. And never more so than when Ezra is involved.