I'm sure we all remember the horrific, violent, bone-crushing, spleen-shattering ugliness when Rebel News "journo" and Nazi paraphernalia authority Keean Bexte ... had a microphone knocked out of his hand because he was being a total asshole: 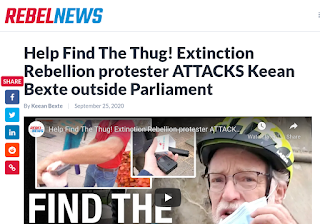 If you want to watch the savage encounter, well, help yourself, but it's dominated by Bexte being his typical gutless, spineless, cowardly, snotty, shrieking like a little girl, pansy-assed snowflake.

You get the idea -- culture-of-victimhood sleazoids like Bexte, Sheila Gunn Reid and David Menzies live for being casually bumped in a crowd, then crashing to the ground and howling in pain like an Italian soccer player. Which makes this recent incident so delightfully educational, as here is Australian Rebel News correspondent and convicted wife beater Avi Yemini brutally slapping the microphone out of the hand of an actual journalist: 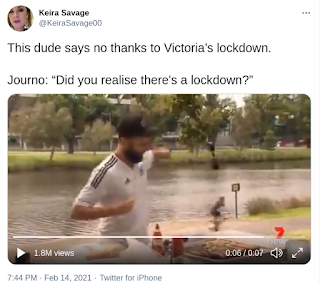 The full video -- all seven seconds of it -- can be seen in all its splendour and glory here, which suggests that the next time white nationalist little snot Bexte or any of the other blathering yobs at Rebel start sobbing inconsolably about being harassed or assaulted, they should be reminded of the above.

You misunderstand soccer. It's not a sissy sport like hockey where players refreshed every 2 minutes. The average mileage of 11 players is 7-10 miles per 90 minute match, only 2 substitutions. One ultimate tactic is to reduce the number of players on the opposing team to 10 or 9, a great advantage. Knocks are exagerated to try to red card or 2 yellow card (equals 1 red card) the opposing team's players, because a red card eliminates one player altogether. Overall, contact is not allowed anyway. So like it or not it draws attention to an infraction and as such is an opportunity for a penalty kick. Soccer players are not whining, they often just heal fast when refs don't make a call.

There is no record I can find of 7NEWS Melbourne reporting on this. The "reporter" or stage hand is not in the frame. It's hard to tell if it's even Avi Yemini. When Guardian reporter Ben Jacobs was assaulted there was a clear record of events.