The weirdness of the Rebel News "loan," Part Four.

To recap, in our first three installments of this sordid nonsense, we learned that, in late 2017 and early 2018, Ezra was handed a wheelbarrow of cash ($380,000) from one Dale Wells of Wells Asset Management (WAM) of Lloydminster (and what the hell is it with that town, anyway?), at a puzzlingly high interest rate of 8.5%, but which Ezra was -- by his own admission -- repaying at a monthly rate that was apparently not even covering the accruing interest, and we further learned that this largesse occurred right around the time that Ezra and WAM announced a pants-peeingly hilarious "Rebel Freedom Fund," an ideologically-driven investment vehicle that promised investors that, if they horked up at least $5,000, they too would be helping sponsor creepy white boy Keean Bexte chasing Greta Thunberg down a hotel corridor: 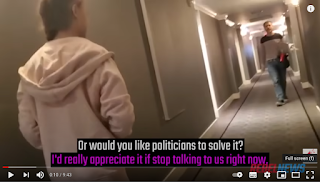 so, money well spent, amirite? In any event, while all of this is downright just plain weird, the most shocking part is yet to come.

That's called "foreshadowing," kids. Get used to it.

A fundamental aspect of this entire affair is the apparent urgency and time-critical nature of Ezra's sales pitch as, if you watch his online beg-a-thon here, only 0:36 in , Ezra claims that this calling in of the entire amount of the loan comes as a total shock, spouting, "We had expected to be able to roll the loans over for another year ...". Only seconds later at 1:07, Ezra reinforces this impression with, "We were surprised by this ...".

Note well the clear and obvious impression Ezra is giving -- that this has come upon him suddenly, that he was utterly blindsided, that this caught him totally unawares with only weeks to respond ... you get the idea. The sense of urgency is obvious, and while it's undoubtedly convincing the more gullible rubes of Rebel Nation to open up their wallets, it turns out that Ezra's portrayal of the timeline is almost certainly utter fiction, and here's why.

It turns out that Wells Asset Management, as far back as mid-2018, were having a wee spot of trouble with compliance regulations related to the Alberta Securities Commission (ASC), as one can read here:

Make sure you appreciate the significance of this; that is, only months after Ezra signed loans with WAM for $380,000, WAM was already having problems with "the firm's compliance with securities laws." Now, this by itself would not necessarily jeopardize Ezra's financial arrangements with WAM, but you would have to be a total imbecile to not recognize it as an obvious red flag and, remember, this is almost two and a half years before Ezra's desperate plea for cash. But it gets worse since, as you can read in that same ASC release, it was in early 2019 that the ASC simply suspended WAM's registrations.

This is an odd turn of events since, in his YouTube hustle, at 2:58, you can hear Ezra clearly insisting that his original benefactor (and I am quoting verbatim from the video here) "... had to sell our loan to a banker ...". Uh, that is not what appears to be happening here. The ASC release appears to tell a wholly different story:

That does not at all look like someone voluntarily selling their financial assets; that looks much more like a financial entity being shut down for non-compliance and being placed in something resembling receivership (or whatever the right word is for this). Again, note the timeline, as "early 2019" is almost two full years before Ezra's "This caught me totally by surprise!" fundraiser. And just to finish things off, here's the official announcement of some org named "Fieldhouse" having been assigned by the ASC to, well, read it for yourself: 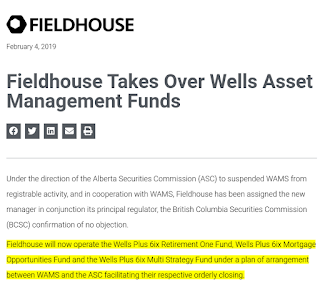 The point here should be obvious -- while Ezra, on Dec 22, 2020, posted a plaintive call for financial assistance, insisting that he was totally blindsided by this latest development, and he needed gobs and gobs of cash right now to survive, it's hard to believe he was unaware that his loans had already been, for almost two full years, in something resembling caretakership forcibly assigned by the Alberta Securities Commission, and that his sweetheart deal would most likely not be allowed to continue beyond the original three-year term. Quite simply, it's inconceivable that Ezra did not see this coming for at least two years, so his posturing of time-critical urgency and being ambushed by this development rings massively hollow.

In the end, one suspects Ezra has every right to fabricate whatever fairy tale he wants to separate the rubes from their rubles, just as others have every right to point out that the narrative he's pushing appears to be just that -- a fairy tale.

Sweetheart deal? He was paying 8.5% interest/year!

Here's what I find the funniest. In one of your earlier installments, you point out that Eazy-E borrowed $380,000, but paid back a total of only $90,000 over three years. Wouldn't that leave him with $290,000 still sitting in his bank account? Sure, maybe he spent some of it, but it's hard to believe he blew through the whole amount, and here's why this is such a grift.

When you ask people for help like this, it's normal to say, "I need to pay back $380,000 right now!" But you also say, "I can cover the first $225,000, but I need help with the rest!" In other words, you show that you're sharing the burden, and maybe willing to return whatever you have left to start things off.

But Ezra simply asked others to foot the ENTIRE BILL! He offered nothing of his own. He took all that original cash, then let his followers pay it off for him in full. What a sleazebag.

I know a little bit about securities, and I think it's safe to say Ezra's description of what happened is highly unlikely. In cases like this, the financial entity that takes over the loan tries very hard to work out an equitable resolution. Typically, there are months of negotiations where there are offers and counter-offers. Maybe the offer from Fieldhouse would have been, "If you can pay off $100,000 as a lump sum right now, and $3,000 per month until it's all paid off, that would work for us." Then there would be a counter-offer, etc, etc.

There is no way any company would have been allowed to, on this short notice, call in the entire loan without having spent time trying to avoid that. The only way this would happen is if Ezra totally refused to co-operate in any way, leaving Fieldhouse with no choice. Ezra's description of how things went down is simply not believable.

Anonymous 1: The "sweetheart deal" aspect of the loans is that, despite the interest rate, Ezra was not being asked to repay even the monthly interest.

I'm going to steal one of your trademarks.

Albertans: "We're suffering. We're hurting. Trudeau is killing us financially! We don't know how we're going to buy groceries, or pay our mortgages!"

Also Albertans: "Let's give Ezra Levant almost half a million dollars. We can afford that."

Stupid fucking idiots. They can't separate fast enough for me.