The weirdness of the Rebel News "loan," Part Three.

If you've been following along with Part One and Part Deux of this cripplingly tedious series, you will already know that, back in late 2017 and early 2018, one Ezra Levant managed to trouser some $380,000 in loans from someone he described only as a generous donor and friend of Der Rebel -- loans that seemed to have some truly odd terms and conditions; to wit:
There is, of course, nothing illegal about any of that, it's just ... weird, which leads one to wonder, just who was this masked mystery benefactor? Ezra never mentioned an identity in his more than nine minutes of pathetic YouTube beg-a-thon, and screenshots of the salient paperwork were (and are) carefully redacted, as you can see here: 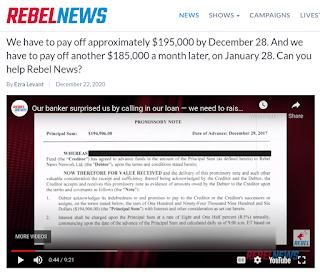 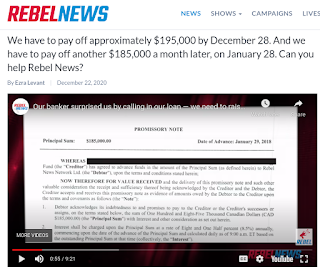 However, it would appear that at least a couple eagle-eyed social mediaers managed to grab a screenshot or two before the redaction kicked in, whereupon we can see just where all that dosh came from: 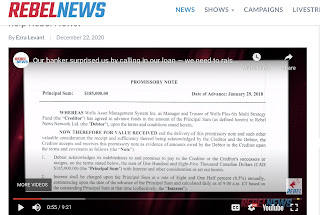 Oh, dear.
For those of you with long memories, if the names of Dale Wells and Wells Asset Management sound vaguely familiar, well, that's because, right around that same time, Rebel News and Wells Asset Management announced to all and sundry the massively mirth-inducing "Rebel Freedom Fund," a proposed financial retirement fund which would, in exchange for at least $5,000, compensate you with a target rate of return of around 4 per cent, an 8x10 colour glossy of Sheila Gunn Reid sitting on a tractor, and a promise to send Keean Bexte around once a month to stalk you to your house. (OK, I might be making some of that up. Maybe.)
I could go into the knee-slapping details of that retirement fund, but one cannot do better than Tabatha Southey, who mocked that eye-rolling silliness as only she can. In the end, nothing ever came of that fund and, rather than attracting the terminally gullible, it quietly collapsed like a flan in a cupboard, with nary an investor in sight. But all this makes one wonder the obvious.
Standing alone, the bizarre terms and conditions of those Rebel loans from 2017 and 2018 make little sense ... unless there was some sort of connection between the loans and the proposed retirement fund. This is all wildly speculative, but in light of how strange were the loans, perhaps they make more sense if they were part of a larger, inter-twined financial arrangement. Who the hell knows? Not me. But there's no law against wondering.
And if you think that's the end of the story, well, buckle up, kids, because there's one more installment, and that's when things get truly weird, and you won't want to miss it. So ... stick around.
Posted by CC at 10:28 AM

I could never understand why the Rebel investment fund never took off. I mean, who WOULDN'T entrust their life's savings to the guy who crashed and burned the Western Standard, failed to secure mandatory carriage for Sun TV and subsequently helped steer them into collapse, and was being profiled in Frank for his failure to pay his contractors? Whose "business plan" for the Rebel included a glorious variety of advertising and sponsorship options, all of which failed and were quietly stripped from the site? Whose readership (according to the Alexa stats Ezra cited with such pride in the early days) is collapsing by every available metric (https://www.alexa.com/siteinfo/therebel.media? Whose roster of contributors has dwindled to handful of amateur bloggers and activists?