I'm struggling to decide just how to mock something this unspeakably stupid from one of the dumbest human beings ever to grace the trailer parks of rural Alberta, Rebel News hack Sheila Gunn Reid, who brings the stupid with:

So buckle up because Dr. Lehr's criticisms about renewable energy can be summed up thusly: 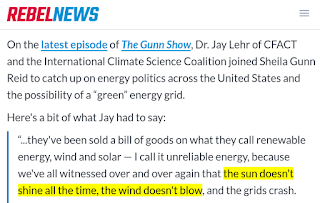 I am not kidding -- that is an actual, unretouched screenshot that, among other things, disparages solar power because "the sun doesn't shine all the time."
I got nuthin'. Really.
AFTERSNARK: While it's remarkably easy to mock the mouth-breathing dumbassitude of the above, there is a more interesting observation to be made here in that this makes it so screamingly obvious the cerebral level of the folks Rebel News is trying to appeal to. What must it be like to know that your ideal audience is so stunningly stupid that the intellectual highlight of their day is to mumble, "Yeah, how can solar power work at night?"
In the end, there's stupid, there's truly stupid and then there's Rebel Nation. I don't want to imagine what might exist beyond that.
Posted by CC at 9:33 AM

Lehr is, of course, an associate of the Heartland Institute and a professional climate change denier (odd, because his area of study is actually hydrology.) He's a particularly interesting specimen: his fury at environmentalists may in part be a result of his imprisonment and fine for defrauding the EPA. (https://web.archive.org/web/20140905140104/http://polluterwatch.org/blog/man-who-defrauded-epa-calls-epa-fraudulent-fox)
This is all in Gunn-Reid's tradition of providing industry lobbyists with an uncritical platform under the guise of "journalism".