Rebel News: Fellatiotastic press coverage if you can afford it.

It was just a few days ago when we examined Rebel News' Ezra Levant's plaintive screed that he has far too much in the way of journalistic principles to compromise his news coverage for money, wherein we established that he was full of horsehockey. But I would be remiss if I did not mention the most howlingly delightful example of Rebel News' reportorial commitment to bags of unmarked small bills over anything even remotely resembling ethics or impartiality.

It was back in 2017 when ex-Rebeler (and where does a Rebeler go to die, anyway?) Chris Wilson was covering the CPC leadership convention, wherein all of the Morlocks were arguing over who would be Head Morlock, and Wilson wrote a piece so appalling sycophantic (don't worry, you can follow the link, it's the Internet-archived version) about Kellie Leitch that, if it were any more laudatory, Wilson would have been out in the parking lot on his hands and knees, giving Leitch's Audi a tongue bath.

It's already creepy that anyone would give high marks to someone who is as much of a despicable, bigoted pile of human refuse as Leitch, but Rebel News would clearly like to have you believe they were applauding her on her merits. Witness the tongue bathing, as Wilson starts off by labeling Leitch as the (barf!) "Canadian values candidate":

You'd almost think Rebel News is taking a principled stand and endorsing Leitch because of her positions or policies ... until Press Progress shows up and points out the inconvenient coincidence that, right around the time Rebel News was slobbering all over Kellie Leitch, Leitch was quietly stuffing a total of $56,500 up Ezra Levant's backside: 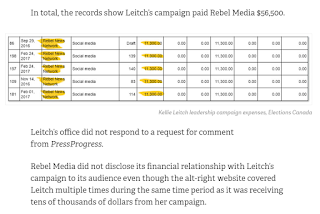 So the next time you hear someone from Rebel News yammering on about how they can't be bought, the correct snapback would seem to be, "Well, yeah, you can, it's just a matter of the price."

"all of the Morlocks were arguing over who would be Head Morlock"--They're not Morlocks. Morlocks work for a living.