Via "Dammit, Janet!", we learn that some Catholics are just as retarded as you suspected:

The flow of medical supplies waiting to be distributed to tens of thousands of earthquake victims in Haiti was delayed for weeks by a massive supply of condoms dominating the space of the main storage facility there, an eyewitness with insider information has told LifeSiteNews.com (LSN)...

The source reported that shipping containers of medical supplies were unable to be unloaded, sorted and distributed since an enormous supply of condoms clogged the facility till early February, when the condoms could be removed. The condoms were estimated to take up about 70% of the space in the 17,000 sq. ft. warehouse.

Hey, I know ... let's do some math, shall we? First, we can (unless we are a Blogging Tory) easily calculate that 70% of 17,000 square feet is 11,900 square feet. Man, that's a lot of square feet. Actually, for you CFL fans, it represents a Canadian football field from sideline to sideline, and from the goal line out to just past the 20-yard line. That's a lot of condoms, isn't it? But wait ... we're not done making fun of the intellectual cripples at LifeSite yet. Exactly how many condoms does that represent?

Well, we'll have to make some guesstimates here, so let's guesstimate. Imagine a standard box of condoms, and assume it's, what, one inch by two inches by four inches, and holds 12 condoms. Does that sound fair? Give or take a wee bit? So a dozen condoms would take up a total of eight cubic inches packed away snugly in their little cardboard box. Now, about that warehouse.

We've working with 11,900 square feet, and let's imagine that we can stack these condoms up to six feet high. Obviously, we have no idea how high they were stacked but it only makes sense to suggest that any sane warehouse manager would stack anything at least that high to be as space-efficient as possible. Normally, I'd guess they were stacked even higher, but I'm being generous to the wingnuts.

So, we have 11,900 square feet multiplied by six feet high, for a total of 71,400 cubic feet of condoms -- representing either a year's worth of partying at every Canadian college and university combined, or a weekend at Kathy Shaidle's, when Arnie wants to feel as little as possible so he can wake up the next morning and pretend it never happened.

That's right -- over 185 million condoms. Which inspires one to wonder just how unspeakably fucking stupid you need to be to believe that, in the aftermath of a catastrophic earthquake, Haiti was gifted with over 185 million condoms. Seriously, what level of staggering retardation does it require to be told a whopper of a story like that, and to actually accept it? But wait ... there's more.

The scenario of medical supply buildings in the developing world taken up mostly by condoms and severely lacking in health care supplies is not new.

When Canadian General Romeo Dallaire returned from Rwanda in the aftermath of the Rwandan Massacre he noted in a 1996 speech that military personnel referred to UN and other foreign aid as "covering the country with rubber." 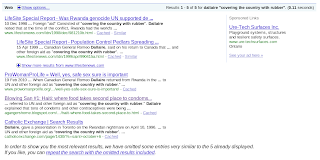 Huh. How ... curious. All of five hits, and not one from a source that has any value whatsoever. It's almost as if that never happened.

But that's just a guess.

AFTERSNARK: One of the Google hits is this yahoo, who gets at least a little credit for not buying into that ridiculous myth. But look who shows up in the comments section there -- one John-Henry Westen, representing none other than LifeSite, who proceeds to regurgitate, word for word, what was in the LifeSite article itself, as if saying something twice magically gives it more credence.

Such is the intellectual horsepower found at LifeSite News: "You don't believe me? Here, let me repeat it verbatim. Did that make a difference?"

(Someone should challenge Westen to back up that Dallaire quote with something resembling proof. I suspect the tap dancing would be spectacular.)

OH, LOOK ... another gullible buffoon. Let's keep track of them, shall we?

Thanks for doing the math, CC.

I tried to visualize the size of the warehouse and the number of condoms that could possibly occupy such a space.

The whole item has that "written for the suckers who support Lies-Site" quality to it, including the exagerations, invented quotes and downright lies.

. . . as if saying something twice magically gives it more credence . . .

How stupid. Everyone knows "what I tell you three times is true."

Getting back to the condom issue, Haiti is a Catholic country. Who in Haiti uses a condom? Has it occurred to you that this might be twenty to thirty years worth of condoms backed up in that warehouse?

just for fun. in a warehouse chances are that the trouser party hats are not stacked on skids (heh heh) but are in shipping containers with a typical dimension of something like 8' X 8' X 40' and you're supposing that the container are not stacked three or four high. thus if the condoms in containers are only one container high you have something on the order of 231,336,000 condoms. now to properly blockade a warehouse i'm assuming they're no less than three high or 694,008,000 condoms more than two thirds of a billion rubbers to make the baby jesus cry.

hiati's population is estimated at just under 10 million so there could be as many as 69 (heh heh) condoms for every man, woman and child in the land. it is also very sad to hear that the good christians were incapable of moving things to make way for other things. that would require entirely too much prayer. or a tow motor. whichever comes first.

OK, I know that cynicism is the order of the day here, but your intolerance of Catholics and other intellectually challenged groups, has made you forget one very important thing...

Inflated, 185,068,800 condoms can create 40,944 flotation devices (at 452 condoms per device...a quantity known to any university frosh week survivor, and not derived from some clever mathematics)

Now, maybe you think the Catholic Church is out to lunch, but I'd say flotation devices are the perfect gift for an earthquake ravaged population, especially one's who are as notoriously promiscuous as a typical islander.

Anyway, what did you want them to send food and medicine? How cliche!

Lindsay beat me, if you're shipping something like that, chances are they won't be palletized, but in containers... as he points out, that's a minimum of 8 feet per container.. And yeah, you can go 3 - 4 high no problem. Even crappy wooden containers (the kind held together with metal clamps, as used in moving storage warehouses, are stackable 3 high.

Imagine all the wallets that the Haitians will need to carry all those condoms around in! I smell a business opportunity!

Did you know that a lot of condom boxes actually tell you explicitly not to carry the condoms in your wallet?

Que-tip boxes say you're not supposed to put que-tips in your ears, even though the only known use for que-tips is cleaning your ears. This is a lawyer's way of saying don't blame us.

Seer.. q-tips and hair dryers and duct tape are all things that have so many uses that it's crazy. Sometimes I have to be reminded that q-tips are actually for cleaning your ears.

If you talk to a ear doc they will tell you the same thing.. but they are clearer: don't go into the ear canal, just clean the outer edge of it.

But I take your point.

That said, I've seen condoms that have been in wallets (not mine - I try to stray from stereotypes) they fall appart