Yeah, I'm pretty sure I never said that, either.

In today's episode of what you need to know about my upcoming (February 12, Osgoode Hall, Toronto) appeal of 2017's s. 137.1 anti-SLAPP ruling against me, we're going to document all of the utterly fictional accusations made against me by Ezra Levant, and how those utterly fictional accusations ended up in the ruling against me, despite my actually proving that I had indeed never said any such things. For expediency, I will simply provide screenshots from my Supplementary Affidavit (SA) of May 2017, which will speed things up considerably.

It was early in that SA that I devoted an entire section to establishing that many of Ezra Levant's claims as to what I had said about his fundraiser were, to put it diplomatically, utter fabrications, and I set the stage thusly: 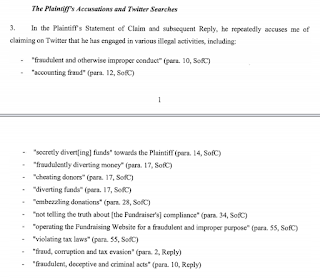 What the above represents are a collection of phrases gleaned from either Ezra's June 2016 Statement of Claim (SoC) against me, or his subsequent Reply, where Ezra is quite clearly claiming that I accused him of, among other things, "fraud", "embezzling", "cheating" and so on. These are admittedly serious accusations ... or they would be if I had indeed uttered any of that.

In order to prove that I had said precisely none of the above, I simply used Twitter's advanced search feature to search my own Twitter timeline from May 1, 2016 through to June 10, 2016 -- covering the entire time frame of Rebel Media's fundraiser with room to spare:

More importantly (and pay close attention to this, kids), I did not simply search for those precise phrases. Rather, so I could not be accused of selective searches or cherry-picking to get the search results I wanted, I widened the search parameters to look for every common variation of the impugned words, as I described here in the very next paragraph of the SA: 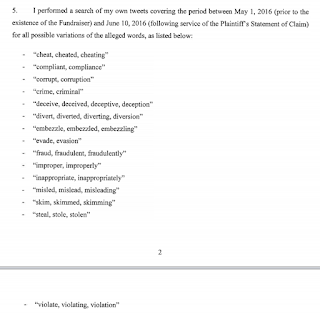 Make sure you appreciate how, in the above searches, I am going out of my way to track down not only the exact impugned words from Ezra's pleadings, but any and every common variation. I performed all of the above searches on my own Twitter timeline, and captured the results. And the results?

Quite simply, I established that I had, in fact, said absolutely none of any of the above about Ezra Levant or his Rebel Media fundraiser, and I entered all of that into evidence.

As one example, here's the search dialog related to "cheating": Here's the search dialog for "corruption": 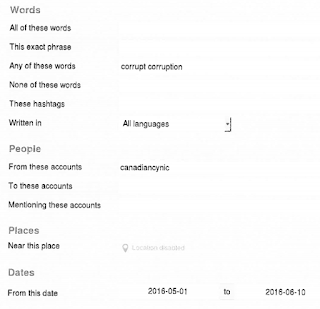 As one final example, let's show the result of searching for the word "fraud", which is arguably the most damning and defamatory accusation one might make: 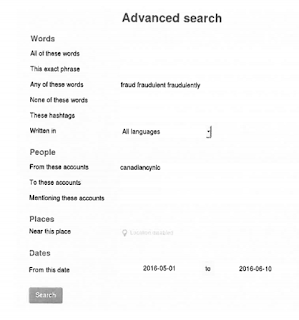 the search result being a single tweet of mine in that time frame totally unrelated to Ezra Levant or Rebel Media: 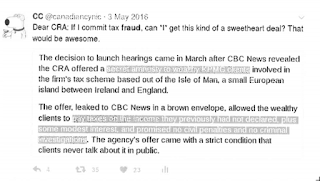 Every one of the other searches produce precisely the same results -- nothing. Not a single match across every search, from which we are allowed to make some really disturbing observations.

First, it is now absolutely clear that all of Ezra's earlier accusations against me are total falsehoods. I said none of those things, and I proved it simply by searching my own Twitter timeline. Those search results are not open to dispute, which is why what happened subsequently is so jaw-droppingly stunning -- the  motion judge simply didn't care.

As you can clearly see, my Supplementary Affidavit listed all of the alleged defamatory phrases from Ezra's Statement of Claim and subsequent Reply, and also the comprehensive search results that established beyond any doubt that I never said those words (or even any common variation of those words) about either Ezra Levant or Rebel Media.

All of this evidence was placed before the motion judge, who ignored it utterly and proceeded to make numerous findings against me by simply copying and pasting from the Responding Party's pleadings:

and, most ridiculously and egregiously: 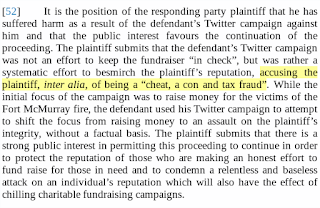 UPPITY DATE: It might be worth noting that, while Ezra was claiming that I was accusing him of various kinds of criminal behaviour, he conveniently ignores this tweet of mine from May 5, 2016 -- only two days after he started his fundraiser: 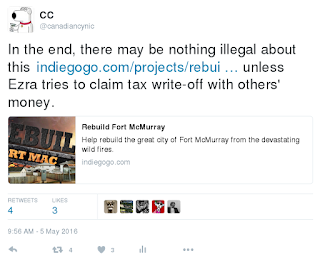 Quite so ... that would be me, clearly suggesting that there is nothing illegal I can see about Ezra Levant's fundraiser, unless there's something about filching other peoples' tax receipts that would be problematic. But other than that hypothetical, I believe readers can safely conclude that I am not accusing Ezra of breaking any laws. And yet, he fabricated all those accusations against me, anyway.