In the midst of a number of lengthy and involved pieces I'm writing about my upcoming (February 12) s. 137.1 anti-SLAPP appeal against Ezra Levant, I thought I'd fire off a relatively short post, demonstrating yet again the deceptive and misleading way that Ezra Levant and Rebel Media marketed and ran their May 2016 Indiegogo fundraiser for the Red Cross and Fort McMurray.

Throughout the course of the fundraiser and in all the time since, Ezra Levant has intimated that his 2016 fundraiser was done with the approval of the Red Cross, that the Red Cross knew about it, thanked him for it, and so on. There were numerous examples of that sort of self-aggrandizement, such as this one from Ezra's 2016 Statement of Claim against me:

where, as you can see, Ezra is bragging that "The Red Cross was aware of the Fundraising Website and thanked the Plaintiff for his efforts." It all sounds perfectly co-operative ... except it didn't quite happen that way.

I have in my possession a number of e-mails that were exchanged between Rebel Media and the Red Cross regarding that fundraiser, the very first of which is a note from the Red Cross' Susan Larkin to Ezra, dated May 5, 2016, which is two days after the fundraiser started: 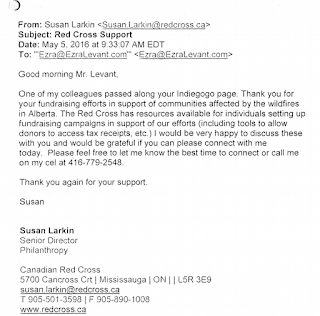 There are a number of interesting properties in that e-mail, but two that should jump off the page at you.

The first observation is that it's absolutely obvious that this is the first that the Red Cross' Larkin is hearing about Rebel's Red Cross Indiegogo page, making it obvious that Ezra Levant established that fundraiser and began collecting donations on behalf of the Red Cross, without the Red Cross' knowledge or permission (a point we shall return to shortly).

The second significant observation is that, while Larkin is diplomatically thanking Ezra for his assistance, she is also clearly pointing out that the Red Cross already has a well-established and proven infrastructure for taking donations (with existing hooks to automatically generate tax receipts and so on), and is just as clearly encouraging Ezra to contact her to take advantage of all of that rather than duplicating that effort.

In short, from that single e-mail above, we can safely conclude that:
Quite simply, the e-mail from the Red Cross' Susan Larkin puts an entirely different spin on Ezra's relentless preening about how he was working with the Red Cross, how the Red Cross totally approved of his efforts and so on. But it's that first point that has quite a bit more behind it.

If you're wondering why Ezra would leap into a fundraiser for the Red Cross without even telling them or asking for their permission, one possible reason is that a lot of organizations have no interest in being associated with Rebel Media, even to the extent of refusing to take charity from them. If you think I joke, you can take the word of Rebel Media's own David Menzies, who wrote voluminously about how Rebel Media started an obviously politically-motivated fundraiser for soldiers at CFB Borden, and how that backfired spectacularly.

You can read the entire 100-page exchange of e-mails at that link, but you can satisfy yourself with this single e-mail near the top: 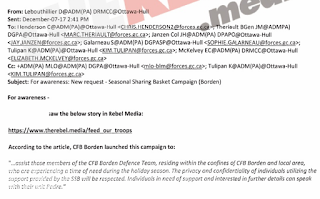 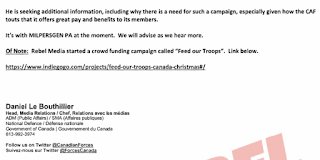 That single e-mail makes it abundantly obvious that:
Under the circumstances, it's not really surprising that Rebel Media prefers to set up fundraisers without the intended recipient's knowledge or permission, since they already have a pretty good idea of the reception they're likely to get.

I just thought you needed to know all that.

P.S. I have an extensive collection of e-mails between various individuals at Rebel Media and their counterparts at the Red Cross regarding Ezra's 2016 Indiegogo fundraiser. Some of them are quite stunning and, if you stick around long enough, you'll get to see them.
Posted by CC at 3:09 PM