No, that's not what I said.

In today's post regarding my upcoming appeal of the monumentally illogical s. 137.1 anti-SLAPP ruling against me, I'm going to once again talk about Ezra Levant's assurance that all donors to his May 2016 boutique Rebel Media fundraiser for Fort McMurray would receive charitable tax receipts and, in the process, I'm going to show how either Ezra or his lawyer chose to massively misrepresent something I said during his lawyer's October 2016 questioning of me for discovery. You'll see what I mean when we get to it.

From my previous post, you might remember that it was during a June 6, 2016 phone call with a representative of the Red Cross that I was, for the very first time, informed that the Red Cross did indeed have the ability to issue tax receipts on behalf of non-registered, third-party fundraisers, provided they were provided with sufficient information. Once I was told that, as you might recall, I immediately published that information, not once but twice. But there's a subtle detail that will shortly become important.

While, once I learned the above, I accepted that tax receipts would eventually be issued to those donors, I had not been provided with any evidence that those receipts had actually been issued. That is, I had not actually seen any tax receipts; I was simply taking the Red Cross' word that receipts would eventually happen at some point down the road. Keep all this in mind for what is about to happen.

It was early in that October 2016 questioning that Ezra's lawyer got around to asking about tax receipts, at which point I thought I made it sufficiently clear that, while I was prepared to believe tax receipts would go out, I had not seen any direct evidence of that -- I believe my position is clear from this part of the transcript: 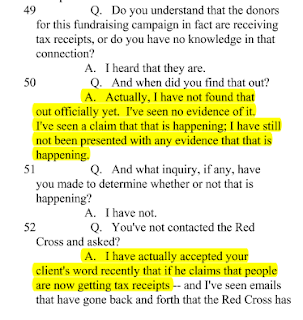 Read the above carefully; I'm fairly confident that my position is clear that I am conceding that tax receipts will be issued, even though I have yet to see any physical evidence of that. It's not clear how you can misunderstand phrases such as, "I've seen no evidence of it" or "I have still not been presented with any evidence that that is happening," and I thought no more about it until Ezra's lawyer circled back later and asked about that issue a second time.

I thought I had been sufficiently clear the first time, so to have Ezra's lawyer ask me again as if he didn't understand me that first time made me slightly suspicious, which is why I deliberately answered even more forcefully that second time, as you can see here:

It's not clear how anyone can further misunderstand the above exchange, wherein Ezra's lawyer asks me if I have received evidence of tax receipts being issued, and I answer (one would think clearly and unambiguously), "I have not."

So, given the above exchanges during discovery, you can imagine my shock and disgust at receiving the Responding Party's subsequent May 2017 Motion Record, which contained the following unbelievable submission:

The above submission by the Responding Party is, of course, a flat-out, bald-faced lie, as that is quite clearly not what I said. This is not quibbling over semantics or trivial pedantry -- I never made that admission at any time during questioning, and I suspect that some of you can already guess where this is going.

To recap, then:
I'll have more to say about Ezra's lawyer's questioning of me in October of 2017, but the above should be adequate to demonstrate the horrifically inaccurate and misleading representation of what I actually said.
Posted by CC at 7:05 AM