Next legal domino to fall on March 16.

Confirmation that the Divisional Court in Toronto will hear our Motion for Leave to Appeal the monumentally incoherent "fresh evidence" ruling that went against me in my ongoing legalistic pillow fight with one Ezra Levant:

Regular readers of my late, lamented Twitter account might recall my s. 137.1 anti-SLAPP motion against the "Rebel Commander", wherein after hearings were held but before the ruling was released, I and my coruscating lawyer hurriedly filed a motion to adduce fresh evidence; to wit, an excerpt from an audiotape that popped up on YouTube wherein Ezra is heard suggesting that his original defamation action against me was simply for the purpose of inconveniencing me:

While we were prepared for a number of objections to this fresh evidence, it never occurred to us that, even without my name being mentioned, it would be ridiculous to not conclude that Ezra was talking about me. After all, it's not as if there was a truckload of people from Ottawa that Ezra had sued for the precise amount of $95,000 for talking about his "crowdfunding."

Imagine, if you will, our shock and dismay when Her Honner, despite all that specificity, still couldn't connect the dots from A to B:

Her Honner's intransigence was particularly puzzling given that Ezra's lawyer, during that motion hearing, clearly and openly admitted that that was Ezra speaking, and that he was indeed specifically referring to me:

One wonders how much more evidence Her Honner would have needed, if a blatant admission in open court was still not sufficient.

I'm feeling moderately confident about this. 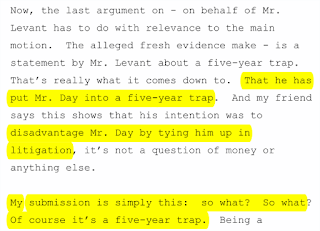 In hindsight, perhaps all that smug, sanctimonious candor wasn't such a hot idea.
Posted by CC at 3:59 PM