Picking up on what one reads from Press Progress over here, it would appear from an early table in that article: 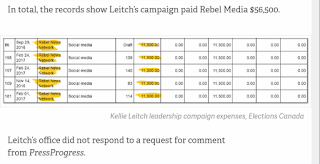 that Kellie Leitch rented Rebel Media's internal mailing list a total of five times, with the going rate for each sponsored announcement being a uniform $11,300 a pop. But ho ... what do we find a bit further down that same article?

A subsequent table purports to show the buckets o' cash that Leitch crammed up the butt of one Nick Kouvalis through his company, "Campaign Research," but if you look closely, you'll see two expenditures with suspicious amounts -- $11,300 on Dec 16, 2016, and precisely double that amount, $22,600, on Mar 10, 2017. 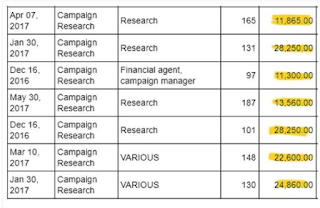 I ask you, gentle reader, what is the odds of an unrelated expense being that precisely related to exactly the cost of the rental of Rebel Media's mailing list, suggesting that Leitch took advantage of Rebel's list on at least three more occasions but ran it through Kouvalis' corp, possibly to muddy the money trail.

All of this is sheer speculation, of course. It's what I do.