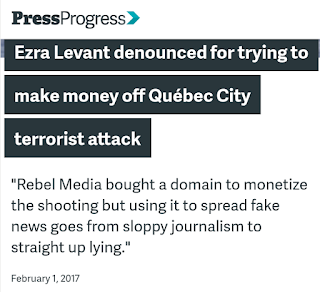 I need more of a challenge in this job.

P.S. As I have pointed out on a number of occasions, Ezra (and others at Rebel Media) have an indescribably sloppy and disingenuous habit of quoting themselves in their headlines. The phrase "turns verdict into a campaign ad" allegedly describing Trudeau occurs absolutely nowhere else in the media other than in Ezra Levant's vacuous musings ... Ezra is not quoting anyone else in that quote, he is simply repeating his own words from his own article.
Posted by CC at 6:59 AM