Rebel News: Privatize the loan, and socialize the repayments.

While there is so, so much to say about Ezra Levant's recent beg-a-thon to pay off some "unexpected" call-ins of loans, there are two really fundamental observations that I don't think are getting anywhere near the attention they deserve. 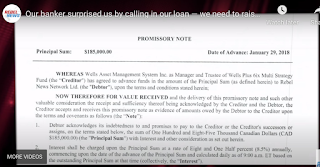 So far, so good, but here's the first place it gets a bit strange. First, in his beg-a-thon, Ezra is asking for, well, the entire original amounts of the loans from three years ago:

which means (and make sure you understand this) that, over the three years of these two loans, Ezra has paid off precisely none of the principal. None. Zero. Squat. Having borrowed $380,000 almost three years ago, Ezra is now desperately asking for assistance to pay off the remaining principal of ... $380,000.

In other words, for three years, Ezra/Rebel News has -- according to Ezra's own admission -- paid at most the monthly interest on all that money. The principal has not decreased at all, and if I were a potential donor to Rebel, I might be at least a wee bit curious as to how one borrows almost $400,000, then structures the repayments to not make even the slightest dent in the principal in three years. But it doesn't end there.

If Ezra has been making minimal monthly payments all this time, one would think he still has a sizable chunk of that original $380,000 lying around, and he might even use some of that to help out with the upcoming payment. Astonishingly, that is clearly not happening since, as you can see below, the original fundraiser goal was, incredibly, the entire outstanding amount of $380,000!

Make sure you understand what Ezra is doing here. After borrowing $380,000 three years ago, and apparently repaying the absolute minimum over those three years, he is openly asking the gullible rubes of "Rebel Nation" to cover the entire upcoming payments. That is, while asking the mouth-breathing yobs that are his groupies to hand over hundreds of thousands of dollars to bail him out, Ezra himself is contributing absolutely nothing.

What genius. What brilliance. Really, you have to give Ezra credit for knowing how to milk the stupidest human beings in Canada for all they've got, while risking none of his own capital. It is truly spectacular, and inspires a paraphrase that could very well be the new working slogan of Rebel News:

Privatize the loan, and socialize the repayments.

P.S. Check back shortly for parts 2 and 3 of this increasingly bizarre story.

At the end of the day, the more Rebel News fanboys he fleeces the better.

He appears to be following the televangelist model of "news" media.

So Ezra borrowed $380,000, paid back none of it, kept all of it, and got his followers to pay it all back for him? Where can I get a gig like that?