This is the level of shrieking, mouth-breathing, dumbass fucking stupid we're dealing with here. For weeks now, numerous right-wing Canadian trolls have been -- based on zero evidence -- howling about how Justin Trudeau has allegedly dropped the ball on getting enough vaccine.

Now that it's obvious we're going to have more than enough, look how the dumbfuck stupid complaining suddenly reverses itself: 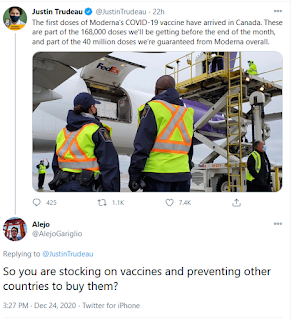 In other words, Canada's dumbass trolls have pivoted frantically from "Justin didn't get enough vaccine for all of us!" to "Justin ordered so much vaccine, we're hoarding it to the detriment of other countries!"

Christ, what dumbass dumbfuckery. This is so tiring.