Recall just yesterday, when various Morlocks from Rebel Media were whining about how those nefarious Liberals were getting in the way of Rebelers contributing piles of other peoples' money to charity.

In particular, recall how Canada Company, possibly realizing they'd been played for the PR value, made it clear they did not want that publicity video to see the light of day: 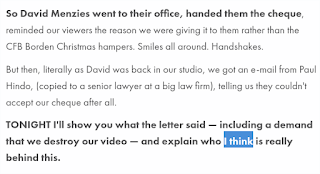 Well, it would appear that Canada Company got their way, and all of that Rebel Media bitching and moaning is down the memory hole:

In other words, it would appear (and note how carefully I use the word "appear") that Rebel Media is so disgustingly toxic, they can't even give money away, and if they try, people get their lawyers involved.

If only the mainstream media thought this was a story worth covering.

P.S. If you Google on "rebel media" and "canada company", Google provides you with these four links, all of them representing someone at Rebel Media being a whiny little fuck about Canada Company telling them to take a hike. 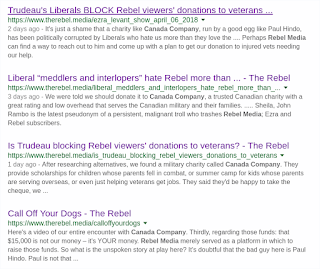 Without exception, all of those links are now dead. The lesson here would seem to be that you don't mess with Canada Company.

HOLY SHIT, IT GETS WORSE!  It's now been over three months since Rebel Media collected $15K of other peoples' money to initially hand over to CFB Borden, who firmly told them to fuck right off (OK, I might be paraphrasing here). Plan B was then Canada Company, who also wanted nothing to do with Rebel Media.

But now, even the initial Rebel Media postings about CFB Borden have disappeared. While Google hands you some links: 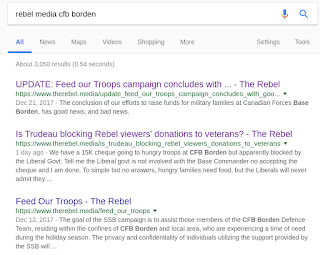 all of them appear to be dead, which inspires one to ask ... just who is sitting on that $15K, and what's going to happen to it? I'm just asking.

RUH ROH ... Pretty sure that this is the video that Canada Company wanted destroyed. So what's it still doing on YouTube?