"Opinion journalism": The Cheez Whiz of the journalistic cheese world.

Recently, Fox News talking head and man with a head shaped like a cinder block Sean Hannity has come under fire for a lot of things, including, well, not being an actual journalist. However, Hannity has a devilishly clever escape hatch, wherein he redefines the word "journalist" to cover whatever the fuck it is that he does: 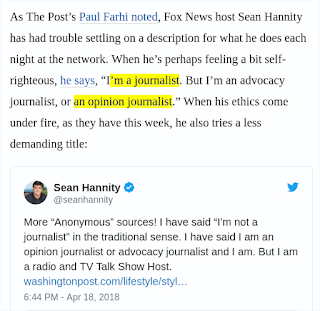 "Opinion journalist" ... damn, that sounds familiar, where have I heard that pathetic, lame-ass rationalization before, oh, right ...

Opinion journalism: when you're not actually, you know, a journalist.
Posted by CC at 2:24 PM