SPANK that bitch! SPANK HER, I say!

[UPDATE, Jun 20, 2009: Unsurprisingly, the post in question has been disappeared, which is why we're such a big fan of screenshots here at CC HQ. But you knew that, right?]

Over at Blogging Tory "Dust My Broom," blogger "Krazy" wants to let you know what he thinks of free speech. Or free expression. Or physical violence. Or just plain slapping around uppity women (with a side order of sexual assault): 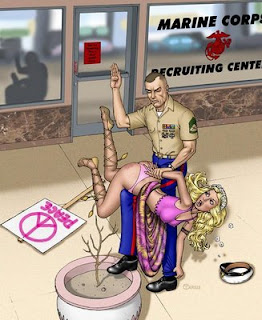 BONUS TRACK: And the ugliness comes out in the comments section ...

YEEHAW! The comments section over at DMB just gets better and better. There's original author Krazy:

That Marine is giving the young lady what she should have gotten when she was a child so she wouldn't grow up to be a leftard and picket in front of a Marine Recruiting station with a peace sign.

Here, let me tighten that up for you, Krazy: "Women who exercise their right of free expression deserve to be insulted as 'leftards' and get violently disrobed, humiliated and assaulted in public."

Let's all keep that in mind the next time some uppity pro-life broads want to have a pro-life demonstration on Parliament Hill, shall we? A little aggressive clothing removal and sexual assault might do them a world of good, is that it, Krazy?

And, curiously, the few (right-wing) women who have weighed in don't see a problem with an assault on other women. How ... odd.

peace is wrong and that can be proven by having older, sexually repressed authoritarians paddle the pert fannies of attractive young women in public. thank you conservative wingnuts for showing us the way to enlightenment. would someone please get mr potatoheadwest a tissue.

And more so in Darcey's comments section, in which one fellow actually claimed that friends of his would do this sort of thing literally, and that he approved. Sick wanks.

Over ad Dawgs, I love how RightGirl claims none-too-subtley how all the "Code Pink" women were molested as girls which is why they are confused peaceniks in need of a spanking or a good beating at the hands of Wendy.

I see the oh-so-enlightened "Raphael Alexander" sees absolutely nothing wrong with that post.

But, coming from the same moron who dismissively called native culture "stagnant" and "primitive", that shouldn't be surprising.

His mask hasn't just slipped--it's fallen off and had a torch put to it.

Of course it's a joke, you humourless commies.

That's why "Krazy" explains afterward that "...there isn't a Marine who would respect a leftard like this young lady or treat her like a lady. She, in this cartoon is being treated the way all peaceniks should be treated."

Sorry, I can't type...doubled over with laughter at the hilarity of it all.

If "Krazy" is an actual Marine then this girl is Tinkerbell.

My ex is special forces and any jarhead who even thought of doing something like that would have his ass handed to him by his fellow men. 'Cause beating women publicly is always such a laugh to men who are combat trained and tested.

While I'm not a psychologist, nor do I play one on TV, I'm going to go out on a limb and say that "Krazy" has some serious issues with women who have the unmitigated gall to think for themselves.

One would hope. But our own military may not be as enlightened as you think. Holding a mess dinner to honour Marc Lepine, for example. Krazy would have felt right at home.

They dishonour the war dead by glorifying war and mocking peace. Their understanding of Remembrance is limited to whatever the government of the day is telling them to remember. They're idiots.

"And, curiously, the few (right-wing) women who have weighed in don't see a problem with an assault on other women. How ... odd."

Well, you know. Other women. Not them. Their right-wing brothers would never turn that inappropriate rage on them.

Of course she secretly likes it, betrayed by her erect nipples. She just can't resist the studliness of her abuser. After all, she was just trying to get Sarge's attention, given the fuck-me shoes, skimpy top and hair done up for clubbing. She's even grabbing his pant leg with her free hand, no doubt trying to pull them down.


Sounds like hunter when she's losing an argument, and she starts to smirk about how all the commenters are there because they are unable to resist such a strong "conservative" woman such as herself.


But the shadow on the wall shows the reality. Just some guy in his basement with what he imagines is his boner.

Jay Currie is a cretinous weasel!

"If "Krazy" is an actual Marine then this girl is Tinkerbell."

bingo. kravy's a vet like i'm a war president. everyone be sure to call him on his lie.

Jay Currie is a cretinous weasel!

No he isn't. He's valiant "sparring partner" for an exceptional progressive blogger.

Seriously, what the fuck is wrong with these people?

oh, well. shere stupidity just put an end to my fun. i think it was "jartard" what finally did it.

Absolutely disgusting. Seriously, wtf is the matter with these people?

And Lulu, the key word there is "publicly". Too many of those service men are all for beating women. Just not publicly. Makes me sick.

Have you lefties put out a fatwa yet over this cartoon?

Hey, Wayne ... nice to see you don't have a problem with publicly humiliating and assaulting women in public either.

I am so unsurprised.