The chronicles of Twatrick: The Patrick Ross saga.

As a number of people have asked me about this privately in the last little while, I will now bring all and sundry up to date regarding my now decade-long legal interaction with one Patrick Ross (self-proclaimed "Outlaw Tory" on social media and, in his own mind, the baddest dood on the Intertoobz).

It was more than 10 years ago that I sued Patrick Ross for defamation, whereupon Patrick smugly refused to even submit a defense and I was awarded a sizable default judgment: 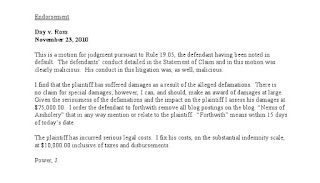 After much chasing of Patrick around Alberta and Saskatchewan, rather than own up to his financial obligations, Patrick chose to file for personal bankruptcy, after which he did absolutely nothing to live up to his responsibilities under the bankruptcy regime, whereupon earlier this year I filed to have Patrick kicked out of bankruptcy, whereupon the Saskatchewan Court of Queen's Bench was happy to oblige, in a ruling you can read here at the Facebook page of my old drinking buddy Dr. Dawg.

If you don't have the patience to read the whole thing, these two paragraphs would seem to sum up the overall tenor of the ruling (the conversion from PDF to text seems to have been less than perfect): 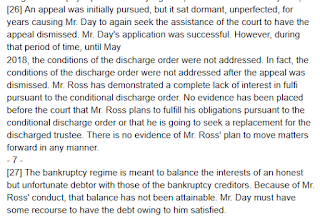 In short, the court system was, as you can see from the above ruling, more than fed up with Patrick's cavalier use of personal bankruptcy to protect himself while having not the slightest interest in living up to his responsibilities as a bankrupt, and has booted his ass out the door so that my original 2010 judgment of $85,000 is now back on the table and fully enforceable, and I have instructed my lawyer to begin the process of collecting the full and entire amount.

It is worth pointing out that the original judgment from back in 2010 has been increasing at a rate of 2 per cent per year so that, once one adds in a few thousand dollars in costs levied against him over the years, Patrick now owes me in the neighbourhood of $110,000 (CAD), and I have every intention of collecting every fucking penny of that. (It is also worth mentioning that, as long as Patrick dawdles in dealing with this, that amount will simply increase at the aforementioned rate of 2 per cent per year until it is paid off in its entirety.)

One final point. If history is any indicator, Patrick will once again dodge and weave and make himself hard to find. If that is the case, I have been assured that I have recourse to the Saskatchewan provincial Sheriffs, who can be tasked with the collection process, all of which would be done entirely at Patrick's expense. So if Patrick thinks he's going to continue to play the same childish games he's been playing for the last several years, someone should tell him the bad news.

I have been patient for almost a decade, and I am now out of patience. If Patrick Ross refuses to deal with this like a grown-up and accept his financial obligations, then he can explain it to the Sheriffs who show up at his residence to start taking his stuff. And that's all I have to say about that.

P.S. It's worth truly appreciating the situation Patrick finds himself in. Due to his relentless and arrogant non-compliance with the obligations of bankruptcy from the beginning, Patrick's own trustee discharged himself back in February of 2014, which means that, for the last several years, Patrick has been an undischarged bankrupt without a trustee. This means that, even if Patrick wanted to start paying off the conditional discharge order as ordered from back in late 2014, he would be utterly unable to do so as there is no trustee to pay it to.

Far worse, though, is that, technically, Patrick Ross is still bankrupt and will remain in that state in perpetuity until he pays off his entire debt to me, which -- as I have explained above -- the court has now ruled is entirely enforceable. In short, Patrick Ross now has to live with all the restrictions of being a bankrupt, with none of its protections. This is what you would call "the worst of all possible worlds," and it is entirely a world of Patrick's own making.

P.P.S. There is no possibility of Patrick appealing the above ruling as it is now long past the deadline for doing so. In case you were wondering.

P.P.P.S. You might want to check back here occasionally in case there are further updates.

BONUS TRACK: There is a certain irony watching smarmy right-wing gasbags like Patrick Ross lecture others on allegedly conservative values like "accountability" and "personal responsibility" and denigrate the principles of "socialism," only to flee sobbing into the protection of taxpayer-funded bankruptcy rather than deal with the consequences of their actions.

But I'm sure you already knew that, right?

On his Twitter account, Patrick is currently supporting the cops who shot Breonna Taylor. What a piece of work.

From what I hear, he should have that much. He's been living at home for years, and he worked full-time at some hardware store in Lloyd for years. And I can't remember where I heard this, but I remember him bragging about inheriting a bunch of property from a relative, so now sounds like a good time to collect.

Can't Patrick just register with another trustee? If one will accept him, that is. Even if he has to pay a registration fee again, it sounds like that would still be way cheaper. Is there a reason he can't do that?

Anonymous 3: As for Patrick being able to resume the protection of bankruptcy, that won't help him. First, trustees have no obligation to accept a client, particularly one with a years-long history of contemptuous non-compliance such as Patrick Ross. But even if a trustee did, that would do Patrick no good for a simple reason.

As long as you're an undischarged bankrupt, you are required to disclose and turn over to your trustee (for the purpose of distributing among your creditors) anything in the way of assets you acquire; this includes salary, gifts, loans, property, inheritance, lottery winnings, you name it -- these are referred to as "after-acquired assets" and you, as the bankrupt, must by bankruptcy law surrender them to your trustee as long as you are officially bankrupt.

What this means is that, for all those years since Patrick filed for bankruptcy in 2012, anything he's acquired since then falls into that category, so that the instant he resumed bankruptcy, he would be on the hook for everything he's acquired over the last eight years -- salary, loans from parents or relatives, inheritance ... all of it. And as long as he *remained* in bankruptcy until his discharge, the same would apply.

That Patrick has wasted the last several years smugly ignoring his legal obligations under the bankruptcy regime while working full-time is what has screwed him totally.

Did you know that Patrick has a second Twitter account, dragonfireideas? And only last year, he was bragging about a "new career" and his "vastly improved finances?"

That should help you collect.

I am not a lawyer, but I know something about bankruptcy in Canada, and I can't believe that bankruptcy court let this guy get away with not paying anything for years. Did they just not care?

Anyway, most of what you said sounds right. If this guy tried to get back into bankruptcy, he would have all kinds of problems. First, no trustee is required to take on a client, and most trustees would not want a client with this kind of history, so I doubt he'd find a trustee that dumb.

And even if he did, since the original trustee is discharged, I'm pretty sure he'd have to pay the trustee registration fee all over again, as if he was starting from scratch. That fee is around $2000, if not more, so he'd have to hand that over.

And I'm pretty sure he'd have to get up to date regarding all his missed payments. $200 a month for the last five years, he'd definitely have to hand that over. And if he has outstanding costs from these court cases, he'd have to pay all of that. So that's already $14,000 and costs on top of that, just to get back into bankruptcy.

And you're right about the after-acquired assets. Everything he acquired as assets since he declared bankruptcy would have to be declared, and all that would be held against him. Depending on how much this guy earned in the last eight years (and if he got any loans or gifts or inheritance), it's possible that getting back into bankruptcy could actually cost him more than just paying what he owes. Hard to believe, but given how many years he paid nothing, it's possible.

Just did more reading so this is a continuation of the last comment. I miscounted, it's 6 years of missed payments, not 5, so it's pretty clear this guy will have to pay $14,400 to catch up all those missed payments, then $2,000 to register for bankruptcy (if someone even accepts him, which is really unlikely), and from what I read, a few thousand in costs he owes you. So let's just say he'll have to hand over about $20,000 right away to get back into bankruptcy, but he still has all those after-acquired assets he has to declare and account for.

I've seen a number of bankruptcy cases but never one this fucked up. If this guy has been working all these years and not paying anything towards his conditional discharge, all that salary will be treated as after-acquired assets. And from what I see, he's been living at home, so he can't even protect any of it by calling it rent. And if any of his relatives have been lending him money, that has to be declared, too. And, as you said, any gifts or inheritance. Basically, any assets of any kind he's received since declaring bankruptcy in 2012. And if he's been making even minimum wage all that time, that's definitely going to total more than the $100,000 he owes you.

I don't see how bankruptcy could possibly help this idiot. Unless I'm wrong, he'll have to pay $20,000 up front, and will still have to pay the full amount he owes you. He'd be better off paying you what he owes you directly; at least he'd save the bankruptcy registration fee.

I think Patrick is melting down these days. He's hiding people's replies, and he's challenging everybody to a fist fight. That dude is fucked up mentally and psychologically.

JUXTAPOSE. (to steal one of your expressions). Right now, Patrick is gloating about radio host Ryan Jespersen being fired, and Patrick's logic is, "If you talk smack about someone, you should accept the consequences."

Patrick has no self-awareness at all, does he?

I've been following this debacle for years, watching Patrick vent on Twitter and insult people and argue in bad faith, and lecture everyone else on taking responsibility for their lives, when he's an undischarged bankrupt who lives at home and now has been kicked out of bankruptcy. You'd think he would have started acting more like a grown-up by now. Instead, as I understand it, he will be turning 40 years old next year, and rather than having a career and a house and a nice car, he's living in his parents' basement and making videos about UFC: https://twitter.com/DragonFireIdeas/status/1316062681951096834.

I'm not optimistic about you collecting your money.

So Patrick Ross' mother passed away in July. I don't know if there is an estate or inheritance involved but it might be wise to ask for the probate document because you never know.