Who the heck is "Rebel Media Holdings Inc" anyway?

Lost in the overwhelming hilarity and outright mockery related to the recently-announced "Rebel Freedom Fund" (thank you, Tabatha Southey) is a curious tidbit I'm thinking no one else noticed, so let me spell it out for you. It's what I do.

From over at the web page advertising the Wells Asset Management and Laundromat with Same-Day Dry Cleaning Service, we have the sub page pimping the aforementioned Rebel Freedom Fund, but it's the opening paragraph there that caught my attention the very first time I read it: 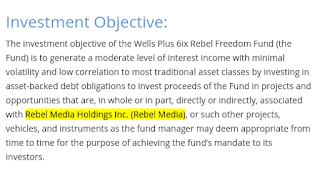 Who (or what) is "Rebel Media Holdings Inc."? Because that is most assuredly not the the name of the Canadian corporation that is typically used as the full and official name for Rebel Media. No, the corporation normally used for that is, of course, "Rebel News Network Ltd.", whose information can be found here: 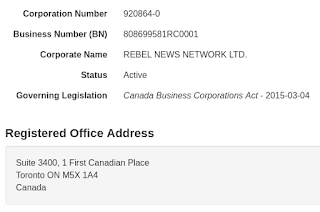 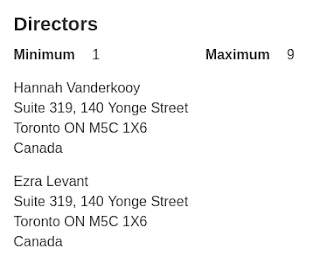 So I ask again, who is "Rebel Media Holdings Inc", and it takes only a couple minutes with Teh Google to end up looking at what is apparently the UK extension of Rebel Media -- that would be "Rebel News Network UK", where one learns that RNN UK has precisely one director (one Ezra Levant), one secretary (again, one Ezra Levant) and, most curiously, precisely one major shareholder, who holds precisely a single share in RNN UK:

And what does this all mean? I haven't the foggiest, I just find it puzzling that the Wells Asset Management page describing the Rebel Freedom Fund goes out of its way to refer, not to the commonly-tagged Canadian corporation Rebel News Network Ltd, but specifically to a corporation that appears to be affiliated with the UK branch of Rebel Media, where things like financial disclosure regulations might be significantly different from their Canadian counterparts.

It's just a curiosity I thought you should know about before you hand over your $5,000.
Posted by CC at 5:29 AM