... now that Canadaland's Graeme Gordon has established definitively that it was Conservative Senator Denise Batters that had me permanently banned from Twitter:

No problems, though ... I mean, it's not like anyone should be concerned about a high-level, unelected politician abusing her position of privilege or anything. And it's not as if Batters' success in depriving a Canadian citizen of their right to free speech might embolden more Conservatives to try the same thing, now that they know they can get away with it with no accountability or consequences whatsoever.

If only there was a prominent CPC politician who beleived [sic] fiercely in freedom of speech: 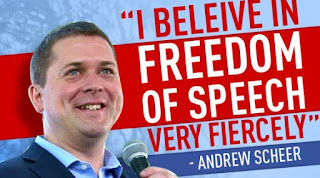