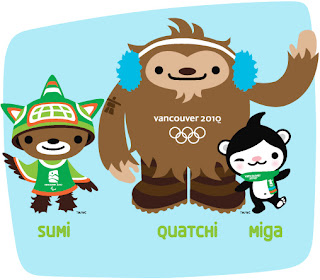 In an effort to exploit the stuffed toy market, Vancouver's Olympic committee unveiled not one, not two, but three official mascots for the 2010 corporate games. For the next two years, these cloying creatures will represent the relentless goal of separating parents from their money. We can be certain that many thousands of dollars were pissed away in the creation of these ridiculous anime influenced turds. Focus groups were focused, power lunches were pigged down and this is what they arrived at,

• Miga -- a snowboarding sea-bear inspired by the First Nations' legends of the Pacific Northwest. Miga, described as mischievous and outgoing, is part sea-bear and part orca whale.
• Quatchi -- a shy and gentle Sasquatch with a long brown beard and blue earmuffs meant to conjure the mystery and wonder associated with Canada's wilderness.
• Sumi -- an animal guardian spirit, who flies with the wings of the thunderbird, is described as "a natural born leader with a passion for protecting the environment."
• Mukmuk -- a Vancouver Island marmot sidekick considered an honorary member of the mascot team."

Yup, they even have an honorary member of the mascot team. Just in case, I don't know, one of these fuckers gets busted in a plush-porn ring going down on a stuffed Mickey. And thanks be to Jeeziz that one of these little puke inciting, saccharine shills has a "passion for protecting the environment" because their corporate masters sure as fuck don't. But hey, it's all about the kids, right?

"VANOC head John Furlong told CTV News British Columbia that he watched the ceremony with a little girl who was in awe of the production.

"She just all of a sudden had this beaming smile across her face and it just made my day sitting there watching all that happen , watching how connected she felt with these characters," he said."

Aw. Isn't that special! You can just hear the sound of the cash register, chiming a happy song in the brisk, winter air. That beaming smile on the little girl giving ol' Mr. Furlong some persistent money wood. Get ready to be besieged by an endless assault by these three fuzzy fucks. They'll be all over your teevee, they'll be selling you official super-sized fries and pops and snacks and candies and anything else they can think of to rip another penny out of your pocket. Charming.

"They will also serve to "bring humour and light-hearted fun to the Games experience and help provide a warm welcome to athletes and visitors from around the world," the Vancouver Olympic Games website said ahead of the announcement."

Gosh, humour and a warm welcome, those will be important. Especially for those international visitors, just you folks forget all about the nice men with their TASERtm brand not-always-lethal greeting guns. Might want to bone up on a little English, you fucking foreigners. Handy phrases like, "Help. I'm lost. Don't kill me please." In fact, I think the whores at VANOC missed the boat with their mascots. To really capture the spirit of the games, let me suggest some alternate mascots. There's Pokery the adorable blood doping syringe, Zappy the cuddly mountie with his sparking TASERtm toy for tots and Shilli the lawyer, helping the world by suing anyone trying to participate in the Olympic bonanza without paying protection money to the racket. That Shilli! Raping the spirit of the Olympic ideal for money, what a scamp. Oh and let's not forget our precious alternate mascot, Homey the disappeared homeless and impoverished poppet. Wouldn't want those dirty poor folk spoiling the scenery, it's bad for the money.

"Mascots can bring in millions of dollars in merchandising, leave a legacy of civic pride and provide a visual identity for the Games. VANOC hopes the mascots will bring in $600 million in sales."

Well it is all about civic pride, ain't it? More than half a billion civic prides, filling the proud wallets of a few fat assed bastards. Well here's what will make me proud, boycotting anything and everything to do with these games. You retailers want to buy in and stick the rings on your product, I'll shop with your competition. Slap one of these mascots on your drink cup, I'll eat elsewhere.

And just for fun, as the games approach, I'll be making extensive use of all of the brand protected terms that the VANOC pigs have stolen from the language. Look for my line of "See You in Vancouver" lube, then there's the "See You in Whistler" baked beans and who could forget my famous "Let the Dreams Begin" brand of opiate suppositories. Ah, Vancouver Olympic Committee, stick the games up your ass and dream.
Posted by Lindsay Stewart at 6:32 AM

That's a lovely rant, CC, but I can't help but feel it's going overboard. Of course mascots are going to be cutesy, near-sickening objects used to rake in the cash while glossing over social problems in the host city/country. That's what mascots are for. Seriously, how is this group, right down to the cultural appropriation, any different from this group?

I can see being critical of the Olympics and the hype, and there's lots worth criticizing, but the mascots being criticized for what mascots have always been designed for? That's kinda spinning your wheels.

good stuff. in reply to the comment above, i think that in the context of homelessness and TASER deaths, these cloying creatures (including the "passionate about the environment" one) are just sickening.

just in time for the introduction of poké ball to the olympic games....

This is brilliant, PSA!

Kelseigh, it isn't that the mascots are being cutesy mascots, it is all about what they are shilling for. I am an ardent believer in the olympic spirit and ideal. I mourn for what has become of that spirit, the monetization of the games and the dilution of that ideal at every turn sickens me. This is just another example of that process in action. You're welcome to all the cute mascots you like. Perhaps Tarry the Exxon Valdez black gull mascot would be a fave or Extincto the humpbacked whale being flensed on the deck of the Japanese ship would help make those sorts of travesties cuddlier.

I'm not going anywhere near the west coast until 2011.

ti-guy, at least spare a thought for those of us who are going to be stuck on the coast and have to deal with this on daily basis. I lived through Montreal '76 ('which could no more have a deficit than a man could have a baby' - Mayor Johnny Flag).

I'm absolutely dreading 2010. Everytime I see that fucking 'Olympic countdown' clock on the Georgia Street side of the Vancouver Art Gallery I have to resist the urge to piss on it as Ozzy did at The Alamo.

Suggestion to make the Sasaquatch mascot more believable to the BC populace. Put him in a recliner with a can of Kokanee talking about about how he's outsmarted Mr. Ranger once again, and calling for his Mugwump.

On a happier note, I passed by Olympia Pizza on Denman street a couple days ago. It's still called Olympia Pizza and he's not taking down his neon five-ring logo sign.

Mosi is my personal Olympic mascot, and hero

I quite enjoyed the Calgary '88 Olympics (stuffed dinosaurs were pretty much inevitable, given Alberta and that the opening ceremonies were held in McMahon Stadium, the home of the U of C Dinosaurs). It really was a ton of fun once the scandals and stuff were over.

I do blame those Olympics, though, for pretty much solidifying the final shift to "capitalist Olympics" which I think was given its first big push in L.A. in 1984. A can of worms got opened that has just exploded since then. So I hardly bother with them any more.

Oh good. Now I know what to get my my favourite bloggers for xmas.

Lived through the Montreal Olympics -- don't remember who the mascots were. These three are just ugly. Oh, and the colours? Nothing says Winter Olympics like sh*t brown and vomit green and turquoise. Even the Inukshuk logo is ugly -- it looks like Gumby. Don't they have any decent graphic artists in Vancouver? Or did someones' brother-in-law get the contract?

PSA: I'm not arguing that, and there's certainly tonnes to criticize. But criticizing whores for being whores, that seems to be grasping at the lowest fruit, hm?

well kelseigh that would be true. but criticizing whores for pretending to be cuddly, wholesome, fair minded, supporters of goody goodness seems fair too.

I preferred the 88 Hidy and Howdy