Snatching defeat from the jaws of victory, taser-wise.


If there's one thing that four RCMP officers should go to prison for, it's being indescribably, criminally incompetent.

You would think that one of the talents a trained law enforcement officer would have is at least a rudimentary grasp of the art of negotiation; that is, being able to defuse a potentially volatile situation. But in the case of Robert Dziekanski, the four imbeciles managed to do exactly the opposite -- take a thoroughly manageable situation and fuck it right up.

As proof, I offer the following still shot, extracted from the video just seconds after the officers had entered the room in which Dziekanski was waiting: 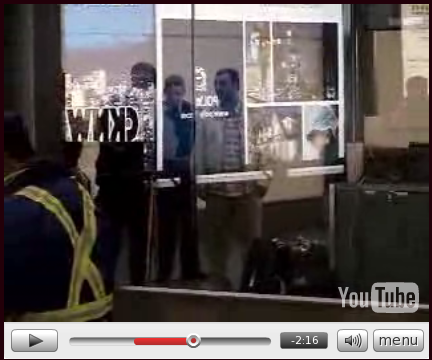 Take a good look. What do you see? What I see is Dziekanski, no more than three feet away from at least one officer, his arms at his sides, apparently trying to communicate. And this is just after the officers had entered the room, where you can clearly hear on the video (link below) someone saying "How are you, sir?" and asking if Dziekanski speaks Russian, whereupon you have the meeting as shown in that still pic above.

In other words -- and make sure you understand this -- everything was under control! Someone was trying to talk to Dziekanski, and he seemed to be trying to get across his messsage. Could you possibly ask for a better outcome than that?

And yet, within seconds, everything goes to shit and the Tasering starts. How? Why? Given that Dziekanski is obviously standing right in front of the officers with his (apparently empty) hands at his sides trying to make himself understood, how in God's name could those officers have fucked everything up so hideously in just a few seconds? But that's not the worst part.

The worst part is how the Retard-o-sphere is so hopelessly misrepresenting what happened in those few seconds of video (see video here), as you can read in the comments section here:

It didn’t strike me that throwing a chair at a glass wall and brandishing a stapler while ranting incomprehensibly (I suppose it might have been comprensible in Polish but this isn’t Poland) when the RCs approach is asking for help in a non-violent fashion.

Really? "Throwing a chair at a glass wall?" I didn't see that happen in the presence of the officers. Did you see that happen? But even if it happened earlier, here's the crucial part -- Dziekanski was standing there quietly. What more could you possibly ask for? Talk to the guy. It's hard to conceive of a more ideal outcome than a supposedly out-of-control, furniture-throwing maniac standing in front of you, reportedly asking for help.

It's beyond belief to see how badly those officers screwed the pooch. One imagines them thinking that they're going to be faced with an outraged lunatic and wondering how they could calm him down. Instead, they walk in to find themselves face-to-face with a man just standing there, desperately looking for help, so they proceed to fuck things up completely and go berserk, murdering the man.

It's time for the perpetually and pathologically dishonest Wankersphere to take a good look at that video, and stop lying about what it contains. It's time for them to stop screeching about flying furniture and hurtling chairs and a stapler being wielded as a deadly weapon.

In short, it's time for them to watch the video and finally admit that they're full of shit. And for once in their miserable lives, to be honest about something.

As the saying goes, there's a first time for everything.

Absolutely right. When you count it up, it looks as if they talked to him for maybe twenty seconds; the screen shot you've got occurs about eighteen seconds into that time frame. Two seconds after that shot, he walked away from them. Within ten seconds of that, they Tasered him. At no time during those thirty seconds does he appear to be doing anything threatening.

This was a disaster.

Two seconds after that shot, he walked away
Sounds like they tasered him for being disrespectful.
Having been both slapped and clubbed for the same offense, I'm not surprised. Sure am glad there were no tasers when I was a lad.

Maybe these RCMP officers had just finished watching that instructional video from the Sûreté du Québec on how to ramp up an otherwise disappointingly peaceful affair.

Well.. if you squint at him a little. He kinda looks like Saddam. He has a head and stuff.

Obviously he deserved to be tasered, he was a foreigner after all. He might have had some explosive pierogi in his shorts or something. Gods knows my grandmother's Goumpki always made ME explode.

( note - that was sarcasm for you right wing dicktacs )

And all these stupid justifications from RCMP brass themselves, which I heard more of on the news this morning, to the effect that tasers can be an effective tool in keeping both the police and the victims, er, I mean citizens, safe.

Indeed. All those hundreds and hundreds of cops who died in the past for lack of tasers! Thank ghod they're all safe now!

I dunno if this will embed or not but I found a video of it as well and yeah you do actually see him beating on a window with what looks like a desk chair around 2:48 and the guy filming says "Ooo right in front of the cops too". He was carrying around what looked like a folding tv tray at one point. Not sure what the deal is with that.


If the embed doesn't work, here is the link: http://www.youtube.com/watch?v=qHKk5qQRzL4

And nope apparently the inbed is not working...

However it also shows him standing there with his by his sides at around 5:30, not yelling or punching or anything when they drop his ass with the taser. He ends up in a hallway After that it's just a pile of cops and security.

I woulda thought one of those people watching would have looked up a basic internet Russian translator and tried to ask him what was wrong or something. Surely somebody had a laptop.

Ack... then around 7:11 you see some dude beating him with the rounded end of his nightstick like he was trying to crack open his skull or something. What the fuck is that all about? I was under the impression nightsticks were generally used along their edge. Around 8:10 the guy with the camera says "he's unconscious. Maybe dead. I heard them say code red."

Basically it looks like when that dude staved in his head with his nightstick that's what killed him. Because he was still moving around and breathing up until that point.

Ah, who needs all that paperwork of dealing with a live prisoner. The dead a lot easier to handle. Nice job RCMP!

Some complete idiot on MDL yesterday was repeating the line that Dziekanski was "berserk" and claimed that in his agitated state of adrenalin-fueled hysteria he might have grabbed one of the officers' guns... and then... who knows!!! Really, this guy was serious. I couldn't believe it. He also claimed that the guy filming the incident kept shutting off his camera, the implication being that he wasn't presenting the whole picture. Again... amazing. Some people will convince themselves of anything it seems.

Will the autopsy results be released to the public or hidden?

They'll be released to the public if somebody gets the coroner indicating the cause of death on video.

It's astounding how willingly authoritarian these losers get, isn't it? I wonder how many of them were critical of Chretien for grabbing that protester, though.

If a cop takes a situation as in control as this -- no weapons, no civilians in danger, no violent actions on the guy's part -- and end up killing the guy, well, I'd be fine with charging them with murder. Kicking them off the force would be the absolute minimum acceptable punishment.

Let's not get carried away now. Tasers are never, ever misused, it's just that some folk won't comply with or submit to a superior ah-thor-a-tay.

If we don't OBEY, we deserve it.