And here's where we juxtapose ...


Apparently, the hard-nosed, kick-ass, take-no-prisoners, "Are you talkin' to me? Are you fucking talkin' to me!?!?" conservative political flunkies who promise to protect us all from the murderous Islamojihadifarians are the same ones who are too pants-pissing terrified to answer the questions of Parliament, 'cuz those committee members are really, really mean people and they can hurt someone's feelings.

Luckily, you can always count on John Baird to show up, scream at someone, punch a lady in the face and bite the head off a live chicken. 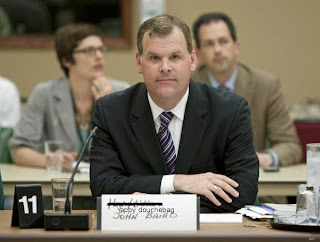 Dimitri Soudas is a coward.

He is a chickenshit, cowering piece of quivering liver. He cries for his mother when things don't go his way.

He is a conservative.

He let's other people fight his battles.

We have put the defence and the security of this country in the hands of the likes of him. Isn't that reassuring?

Look what a piece of cowardly crap your vote got you.

Want a piece of me Dimitri? No problem, you cowardly turd. Single combat. Look it up.

I'm fairly sure Dave means it, too.

John Baird with his mouth closed. I barely recognized him.

The most appropriate of photos.

No bared fangs, no pointing finger?

How do we know that's the real John Baird and not a cardboard cut-out?

Lard Thunderin' himself. :) Chicken Hawks, the bunch of them.

Is it me, or has he lost weight? Has somebody been criticizing his waist line? The frequenters of certain establishments in Toronto probably finally got to him.

There is a certain smugness about Baird and that "yappy douchebag" that seems rather appropriate.

I'm that with this new development, ministers will be answering journalists questions - or will that somehow be different again?

Too bad that the Liberals and NDP seem to play along with these games and don't see that parliament is supreme.


The conservatives are children and should be mocked more often. I wonder if they will see the irony of their ridiculing Linda Keen, Richard Colvin and others...

I get a sense that Harper is making rules up as he goes along...