You say "bitch slap" like it's a bad thing.

Wherein Rebel News' pompous, tough-talking, in-house neo-Nazi Keean Bexte gets his pasty Aryan "Tomorrow Belongs To Me" ass kicked by an 81-year-old, mask-wearing vegan with osteoarthritis and a bad hip. 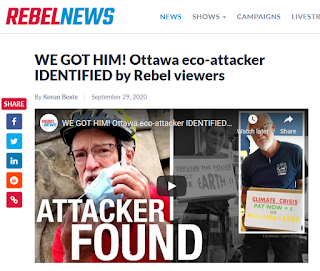 JUST ANOTHER REBEL NEWS RIP-OFF? After offering a cool $500 for the identity of the doddering senior citizen who slapped the bejeezus out of Rebel's in-house goose-stepping little turd, Rebel News now insists that the sleazy tattletale who coughed up the name graciously waived the bounty, whereupon some of Rebel's dimmer bulb commenters are less than impressed: 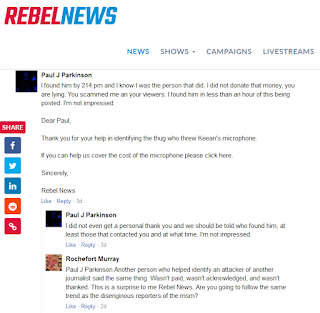 Dear Paul: You read Rebel News ... how can you not be used to being lied to?

BONUS TRACK: Good Lord ... even the intellectual defectives that read Rebel News are finally starting to clue in to the perpetual grifting and scamming:

OHMIGOD, IT GETS SO MUCH BETTER, as Rebel's Bexte is now selectively editing the video of that encounter to exaggerate what happened. As much as I dislike sending people to watch that greasy little turd, you need to watch the first minute of the encounter here on YouTube. Note carefully how the environmental protester is clearly and emphatically telling Bexte to fuck off and that he doesn't want to talk to him. Rather than taking a hint, Bexte continues to harass him, calling him hypocritical and stupid, whereupon it takes almost a full minute before Bexte's victim finally loses his cool, grabs the mic and slings it down the sidewalk.

Consider now this second version of the encounter on YouTube, wherein Bexte has deliberately excised the entire segment where he continues to goad and insult, and simply picks up where his mic is grabbed and tossed down the road.

Most people would call that "dishonest;" given that Bexte works for Rebel News, I'd simply call it "normal."

OHHHHHHHH, MYYYYYYYYY ... Source who insists on keeping a low profile assures me there's way more happening with these Rebel News/Keean Bexte physical confrontations than meets the eye, and it's all part of a sleazy money-making campaign. I'm going to write it up so you might want to check back in a day or two.