Stephen Taylor and "Neo Conservative": Two peas in a pod. 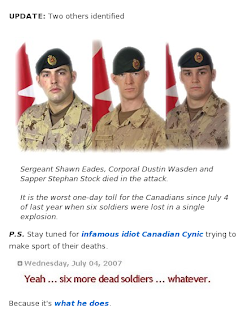 Apparently, I am a thoroughly despicable human being because I once professed an utter disdain and monumental lack of concern for six dead Canadian troops, as clearly evidenced by the title of a post, "Yeah ... six more dead soldiers ... whatever." I mean, that must be what I was doing, right? Right? Which would seem to be Neo's point.

Curiously, though, for someone who wants to rub my nose in that post, Neo fails to provide a link to it, which would seem to be the normal thing to do. How odd. So since Neo seems determined to not let you see the actual content, let me help:

Six dead Canadian soldiers in Afghanistan. On the one hand, I could be grief-stricken. On the other hand, maybe I'll just chill out and take it in stride like this guy.

Oh. Dear. It was sarcasm. Specifically written to mock one of Neo's BT colleagues. Isn't that special?

In short, Neo reproduces a blog post title, misrepresents its meaning, then carefully fails to provide a link to that post so interested readers can see what's really going on. How utterly unsurprising, particularly given that Neo himself doesn't give a shit about dead Canadian soldiers, and never has. And what does Stephen Taylor have to do with any of this? Simple.

These people are Taylor's creation. They're his responsibility. And he seems utterly unconcerned by their perpetual and relentless dishonesty. Which is why, as I'm sure you've noticed, I intend to hang douchebags like Neo around Stephen's neck every chance I get.

It's amusing to watch Canada's BTs bitch and whine about how we refuse to engage them in "civil" discourse, only to have them lie about everything. All the time. What's to engage? Those are your bloggers, Stephen. And they're dishonest cretins. And I plan on making sure no one ever forgets that.

Stephen Taylor's Blogging Tories: Because they lie. All the time. About everything. Fucking douchebags.

Neo is a foul excuse for a human being.

Seems like he deleted your comment...something about Zyklon-B?...I hope you have a screen shot.

I never left such a comment, I have no idea what that's all about. But a Blogging Tory deleting dissenting opinions? No way! Say it ain't so! :-)

Well, then I'll just bet he's faking the delete... it didn't look right as a delete...

Yes, Mike, Neo is lying about me. Again. I'm sure you're shocked. But hang in there -- there will be a special Neo-flavoured blog post later today. Stay tuned.

I was once a part of a focus group where I met some really nice people i.e. until the discussions started.

Every one of those "nice persons" turned out to be a closet xenophobe with some really weird ideas about immigration (the topic of discussion.)

10 brownie points for guessing who they always vote for.

The expression "falling on deaf ears" comes to mind whenever you do one of these posts linking Taylor to asswipes like "Neo". I can't blame you for trying, but you do realize that it's utterly futile, I hope.

Apparently, I am a thoroughly despicable human being because I once professed an utter disdain and monumental lack of concern for six dead Canadian troops,

In other news:
US-led coalition forces killed 76 civilians - including 50 women and 19 children - in a military operation yesterday, the Afghan government said.
Wonder what Neo will think since I care more about the 76 civilians than soldier that know they maybe killed when they join?
As far as I care, bring all Canadian soldiers back in body bags if this is what it takes to bring sense to this futile adventure.