As soon as I saw journalist Dale Smith's tweet about the indescribable lameness of a CPC MP's performance in QP, and Smith's quip of, if a horse was that lame, they'd shoot it, my absolutely first reaction was that it was only a matter of time before the entire Canadian Rage-o-Sphere exploded in, well, Patrick Ross-level bad faith and rage, shrieking something like:

Sadly, I got distracted before I could post that, which is a shame since, well: 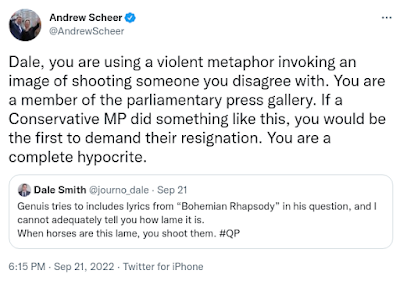 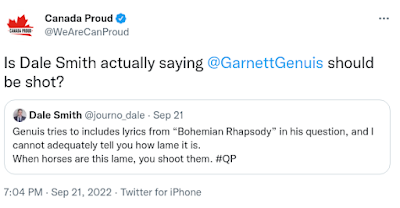 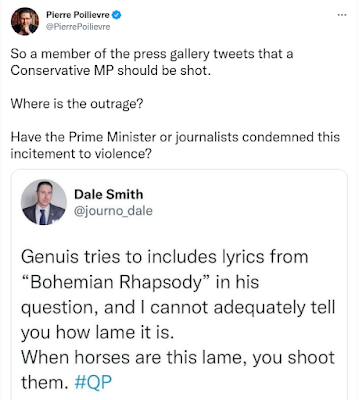 P.S. That last tweet was from the new leader of the CPC, who publicly supported the white nationalist "Freedom Convoy" that descended on Ottawa for three weeks and really did call for the murder of Prime Minister Justin Trudeau. But, hey, let's not quibble over consistency.

P.P.S. If we want to argue about shooting-level lameness, we can start with House of Commons Speaker Anthony Rota. Fight me on that.

Andrew Scheer appears to believe that horses are shot for disagreeing with humans. Meanwhile, Proud wonders whether Garnett Genuis is in fact a horse.

Note that Smith called Genuis' question lame and suggested it be shot. Only a bad-faith reading of the tweet sees a "threat" to Genuis.

Wow, the man who would be Prime Minister doesn't understand analogies.

In other news, Poilievre refuses to ever go outside again after being told that "It's raining cats and dogs."

Considering most CPC support seems to come from the prairies and the rural areas of BC where they LOVE to cosplay themselves as cowboys, you'd think they'd understand the analogy better.
But these are conservatives. Performative outrage is 90% of what they've got to offer people for ideas. (The other 10% is stochastic terrorism.)

I love how endless conservative outrage always comes with the usual “where is the outrage?!?!?” Its all over the internet dumbasses. You are doing it right now. But what they want is to always control the media narratives, so their outrage is the media story while the outrage of non-conservatives is dismissed as censorship or cancel culture or more evidence that conservatives are constantly under attack from “others” and perpetually persecuted by meanies on the left…who all just follow secret orders from Trudeau of course. Heads they win, tails we lose. That’s really the one and only right wing strategy.

Can they not distinguish between a question that is lame and the asker of the question?